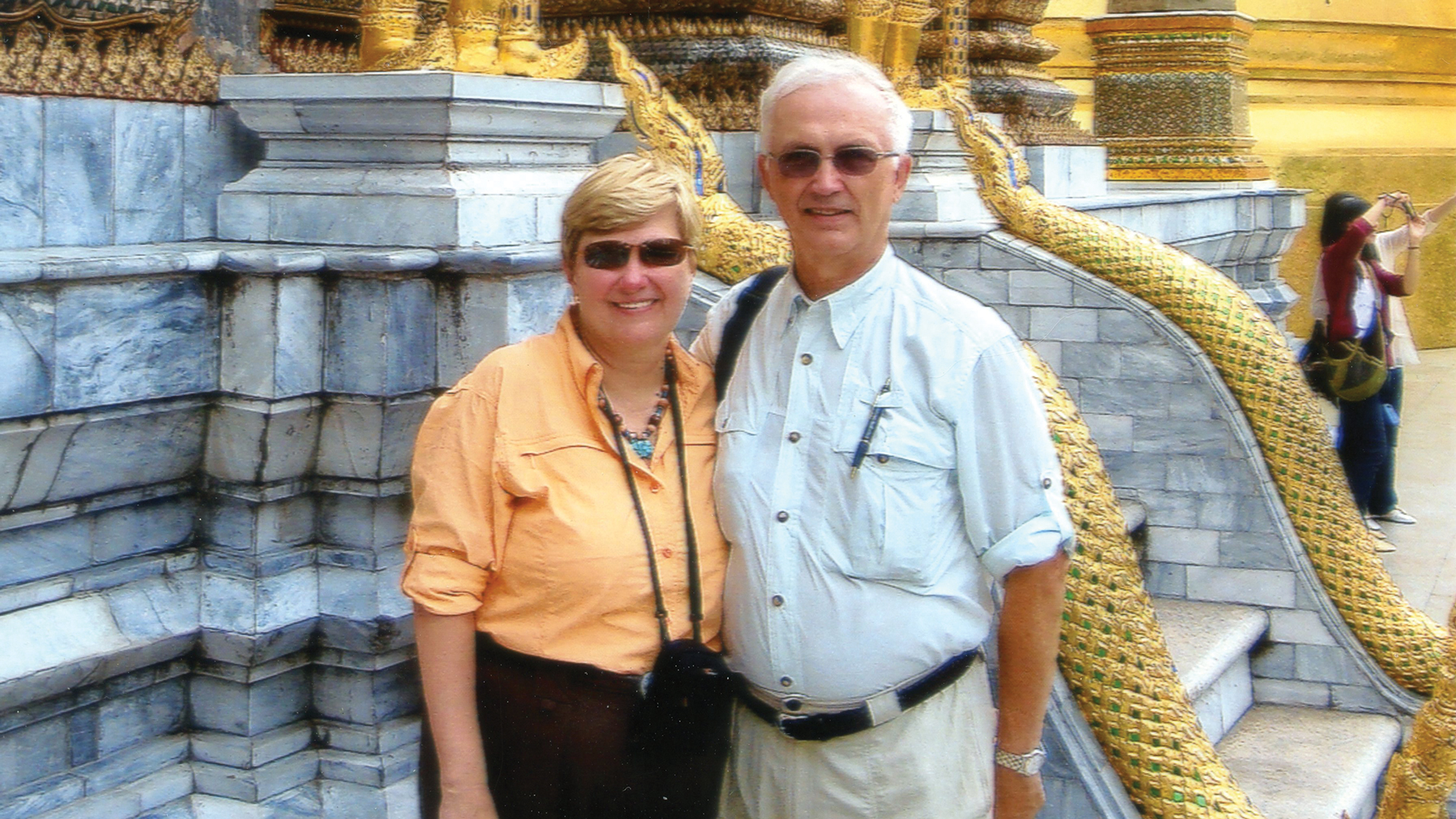 Haag with husband, Walter, on one of their many trips around the globe.

In her early career as an elementary school teacher, Joanne Haag ‘69 used her stamp collecting hobby as a tool to teach her students in Washington, D.C., about crucial moments in history. At the time, she didn’t know that her interest in stamps would also set the stage for significant milestones in her own personal history.

Stamp collecting not only evolved into a successful side business for Haag and her husband Walter but also led to a serendipitous meeting and job offer that redirected the course of her career from education to the corporate business world.

“I thought I was going to be a teacher,” said Haag, president of H.P. Thompson UTEC, an engineering firm based in Milford, Ohio. “When my husband was transferred to Cincinnati, I inquired about teaching positions there, but I was too high up on the pay scale, coming from the East Coast.” Potential employers could hire new college graduates for less.

Left with no job prospects and time on her hands in an unfamiliar city, Haag took a friend’s suggestion and attended a luncheon held by a local stamp group, hoping to meet other collectors and dealers. One of the men she met co-owned an engineering firm. “He asked what I would do while I’m in Cincinnati, and I said I didn’t know,” Haag recalls. “He gave me his business card and asked me to come in for an interview for a job opening at his firm.” To her surprise, she got the job, so she set out to learn everything she could about engineering.

H.P. Thompson UTEC represents manufacturers of industrial equipment and works with such clients as Procter & Gamble and major universities to power massive industrial plants and manage waste and water filtration.

“I did it on sheer guts and faith,” Haag said. “I worked my way up, and after five years, I owned stock in the company. I was motivated and I loved what they did. I loved the client base and, 40 years later, it’s history. It’s been a real adventure!”

Since her business partner died 22 years ago, Haag has run the operation singlehandedly and with the knowledge and expertise of a seasoned veteran. But in the early years, working in a male dominated field alongside degree holding engineers when she held a degree in education presented some challenges and required that Haag prove herself through hard work and determination.

Today, as she celebrates her 50th anniversary as an Alvernia alumna, she credits the university for giving her the knowledge and foundations that have guided her career. “I’ve taken a very different life path,” she said. “No matter what your degree might be in and what you’ve prepared for, Alvernia is the stepping stone for whatever you choose to become in life. It teaches the values that help your character development and that help you grow as a person. Those values carried me through making many business decisions over the years.”

Parallel to her career with the engineering firm, Haag and her husband of 48 years have built a thriving business in stamp collecting and dealing and attend more than 20 shows each year as national accredited dealers. They have spent much of their free time over the years traveling with their son, Steven.

“A trip around the world with my husband and son was tops,” said the Pennsylvania native. Steven, now 34, lives in London and co-owns a boutique hotel in Scotland on the island of Islay, famous for its Scotch whiskey, scenery and seafood. The family enjoys get-togethers a few times each year there. Haag said her other favorite destinations are Bangkok for its unique culture, shrines and floating market, and New Zealand for its beautiful scenery.

“When my son turned 10, we went on one major trip every year, to places like China, Hawaii, Switzerland and the Caribbean,” Haag said. “Your education is one part of who you become, but traveling is a different kind of education, learning about different cultures and how to interact with different people.”

Haag said she had a crash course just after college when her husband took an assignment with the World Health Organization in Switzerland. “We lived there for two years and it was an incredibly life-altering experience. We traveled everywhere, all over Europe and to Greece. It broadened who we were as people and shaped our future.”

Haag said she is especially proud of her son’s achievements. Steven attended Emory University, where he earned two bachelor’s and a master’s degree. Later, he received a master’s with honors at St. Andrews University in Scotland and then pursued a law degree in London. All of his studies were on full academic scholarships. Following his parents’ footsteps, Steven has continued traveling the world and, to date, has visited more than 50 countries.

Even though five decades have passed since she was a student at Alvernia, Haag has fond memories of the lifelong friendships she made, and she remains in touch with several friends, including her college roommate, Mary Kay Murphy ’69, and best friend Nancy Nicklas ’69.

“That’s the thing that had the most impact for me, the friendships and relationships you develop there,” she said. “We were a small class, so we participated in everything together. No one was just a number; we each had an identity. For us, that family atmosphere shaped who we became.”

Solar Plexus
Loyack Letter: What is yours to do?
Raising Awareness to New Heights
Learning and serving through COVID-19
Advancing opportunities