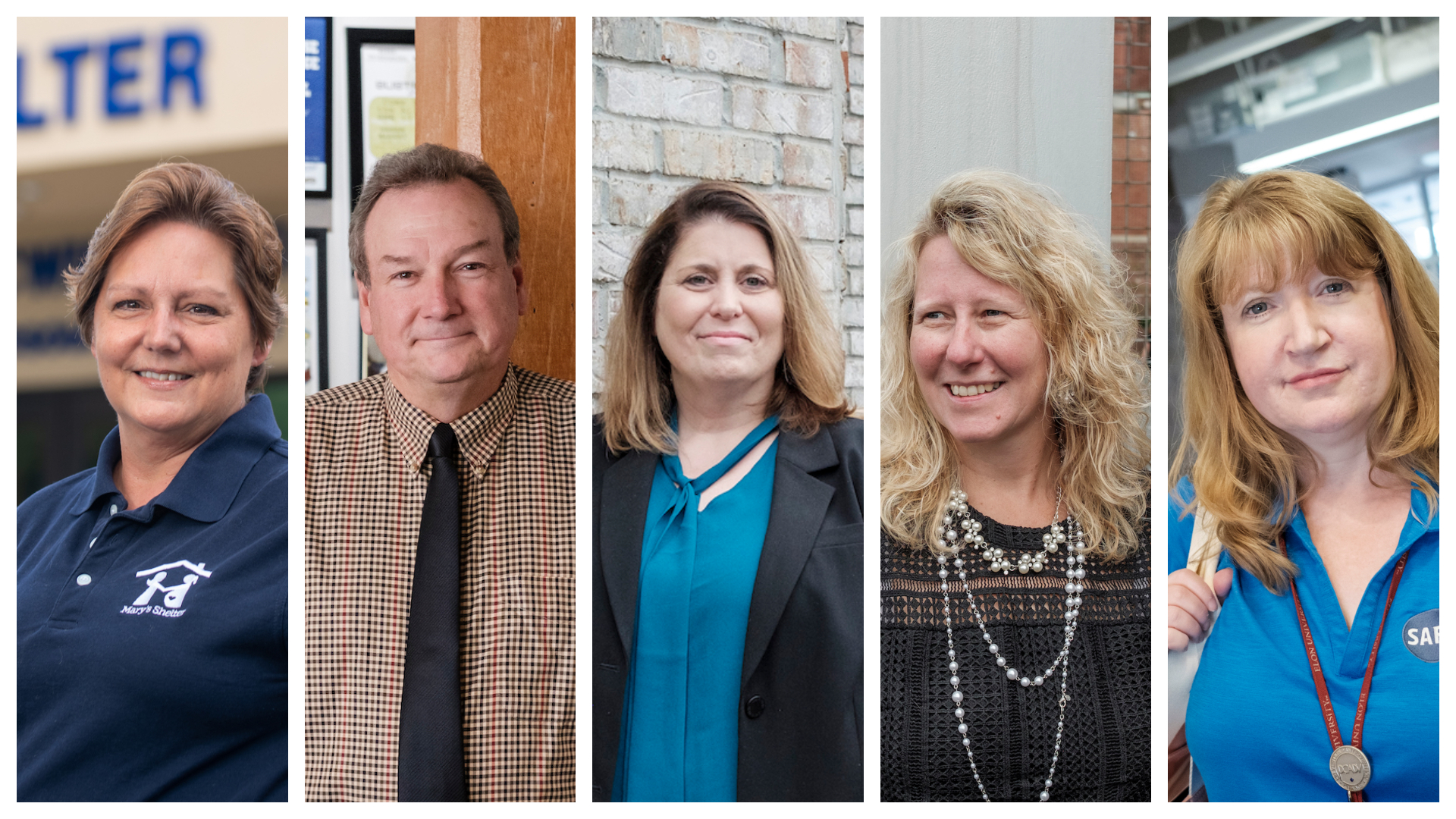 While talking with five Alvernia graduates currently leading nonprofit organizations in Berks County, one notices the repeated use of certain words, phrases and ideas.

Words and phrases such as humility, passion, service work, mission, a calling, faith-based and blessing frequently arise in conversation. The concepts of giving back, helping others and making a difference are recurring themes from these servant leaders, who work in various capacities to make the Greater Berks community a better place. They shared their visions, challenges and inspirations, and spoke of the role Alvernia had in shaping their careers and their lives.

Stacy Grube, M ’17, is the chief executive officer of Dayspring Homes, a faith-based organization that works with intellectually and developmentally disabled individuals. Serving others comes naturally to her. “My entire life has been in service,” she explained. “I knew when I was 14 that I was called into some sort of ministry to serve others.”

Grube enrolled in Alvernia’s Master of Business Administration program while working as vice president of by Susan Shelley administration at the Children’s Home of Reading and said the degree helped her transition into the executive officer role at Dayspring Homes.

“It was a good way to advance my skills and Alvernia was an easy choice,” Grube said. “It has a fantastic reputation and its values match up with my values.”

Christine Folk, executive director of Mary’s Shelter/ Mary’s Home, has a long relationship with Alvernia, both as a student and a nonprofit leader.

After graduating from Alvernia’s nursing program in 1986 and working as a labor and delivery nurse for several years, Folk found Mary’s Shelter, an organization that provides housing and education services for pregnant women and mothers of newborns. From the minute she arrived as a volunteer, she was hooked.

“I fell in love with the concept that it wasn’t just a shelter but also an educational facility,” she said.

Her involvement with the organization increased, and she took the reins in 1997 with a goal of helping clients further advance their education. “We have a requirement that all moms need to complete high school or get a GED,” she said. “But I wanted to see more of them continue their educations.”

At the time, Mary’s Shelter was located near Alvernia’s campus. Folk recognized an opportunity and sought a relationship with the school. “And, that’s when Alvernia adopted us,” she said.

The university and Mary’s Shelter, which has expanded tremendously and moved to a new location in 2018, continue to partner to educate clients. Alvernia students intern and complete volunteer hours at the shelter, and the university provides scholarships and welcomes its residents on campus. “The relationship has been such a blessing,” Folk said. “We always talk about the miracles that happen here, and Alvernia has been a part of those miracles.”

Meggan Kerber credits Alvernia with instilling in her the value of service when she was an undergraduate there.

Kerber, who graduated from Alvernia in 1996 and earned a master’s degree there in 2001, took over in August 2018 as executive director of Berks Arts Council. She previously served as director of development for Bethany Children’s Home, Inc.

“Alvernia is where I learned the rewards of service, and I’ve been serving ever since,” she said. “I’ve been in nonprofits pretty much my whole career.”

Kerber’s strong history of service includes giving back to her alma mater by serving on several committees and councils. She is a mentor for a Reading Collegiate Scholar and has been nominated to serve on the university’s board of trustees, beginning with the 2020-2021 school year. “There is great opportunity to give back to the university for what it has given me,” she said. “Alvernia is a stronghold in the community for service, peace and justice.”

Tim Daley ‘78 insists that he enrolled at Alvernia to play basketball, with education only a secondary consideration. What he acquired as a student was completely unexpected. “What Alvernia did is infuse me with an absolute thirst for learning,” said Daley, executive director of Habitat for Humanity of Berks County. “And for that, I am forever grateful.”

A criminal justice major who spent 17 years on the Reading police force and also worked as a teacher and safety management consultant, Daley learned about serving others at an early age from his mother, a nurse. “People would come knocking at our door in the middle of the night and my mother would go to help,” he said. “I guess doing work that has some sort of societal influence is just in my DNA.”

Daley, 65, who grew up in a row home in Reading, said Habitat clients want the same things as anyone else. “At the end of the day, it’s all about wanting a sense of place for their children to be safe and to be part of a community,” he said. “That’s what we’re able to do for our clients, and that’s a blessing.”

Mary Kay Bernosky, MBA ’03, chief executive officer of Safe Berks, was a seventhgrader when she read “To Kill a Mockingbird” and decided to pursue a career in law.

After getting a law degree from the College of William & Mary, Bernosky earned an MBA with a concentration in nonprofit leadership from Alvernia University in 2003 while working full time as Schuylkill County solicitor. She accepted the position of executive director of Berks Women in Crisis in 2005. The organization in 2016 changed its name to Safe Berks.

Bernosky worked closely with Alvernia President Emeritus Thomas F. Flynn over the years and is grateful for the support the university has given Safe Berks. “Tom Flynn gave us the Pro Urbe Award (presented to an organization that contributes significant community service), and that raised our profile and paved the way for our capital campaign,” Berknosky said. “That was a great gift to us.”

Bernosky believes her work has made a difference not only to the women served by Safe Berks but also to their families and the greater community. “It’s hard work, but really, it’s my calling,” she said.

Loyack Letter: What is yours to do?
Advancing opportunities
Solar Plexus
Kerber ’96 MBA ’01 returns to Alvernia as AVP for Institutional Advancement
Raising Awareness to New Heights