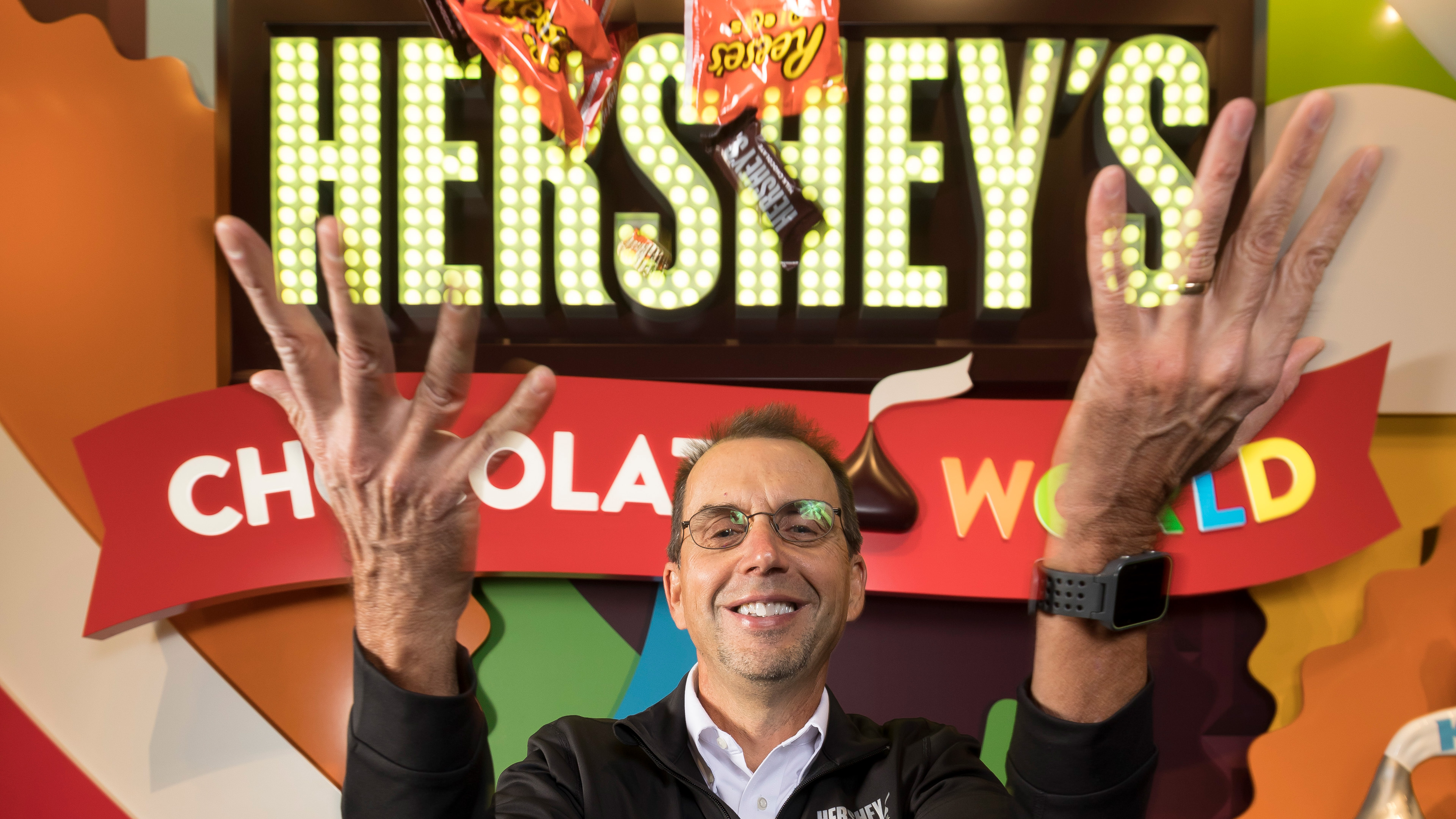 Two months after he graduated from Alvernia University with a bachelor's degree in business, Steve Bentz ’83 accepted a job offer and moved with his new wife to Ohio to work win sales for the Hershey Pasta Group, a division of the Hershey Company.

At the time, Bentz could never have imagined that for the next nearly four decades, he would work his way up in the world-famous chocolate corporation to his current post as global director of the World Travel Retail Division. In this role, which he’s held for 10 years, the longest of 12 positions on his Hershey resume, Bentz has traveled to 60 countries and developed a thriving business that targets the international duty-free market.

“This job has captivated me,” he said. “I’m enjoying it so much. I’ve been blessed to have this opportunity to build a business and create partnerships and friendships all over the world.” Some of his favorite destinations have included Singapore, Dubai, London and Langkawi, an island off Malaysia.

“Be open to possibilities”

Over the years, Bentz sold household pasta brands like Ronzoni and San Giorgio to grocery stores, ingredients to restaurants and chocolate bars to military bases. Looking back on his own career, he said that he’d advise today’s college graduates to always “be open to possibilities.”

“I was not a great student in high school,” Bentz said jokingly. “But I got along with people and I was open to possibilities. If a new role came up, even if it was a lateral move, I’d take the job that would lead to more opportunities.”

Bentz has found it rewarding to work for an organization that has a reputation for philanthropy and giving back to the community. “I’m always reminded of the principle of ‘doing well by doing good,’ which is attributed to Mr. Hershey,” he said. “He established the company based on philanthropic principles and was a pioneer in corporate social responsibility long before it became fashionable.”

By volunteering in Project Fellowship with the students at the Milton Hershey School, Bentz and his colleagues carry forward the spirit of giving that Mr. Hershey cultivated all those years ago. “It brings me as much joy as it gives them hope,” he explained. “Simple things like shooting hoops, having game nights or celebrating the holidays give these young men some sense of normalcy.”

Last year, Bentz spread some Hershey cheer at his alma mater when the company and the Bernadine Sisters were simultaneously celebrating their 125th anniversaries. He and his wife, Judy, brought candy bars, anniversary cakes from Hershey Chocolate World and a live Hershey’s Kiss character to a visit with the sisters at the retirement and long-term care facilities. “It was a blast, and the appreciation they expressed was priceless,” he recalled. “I’ve been blessed to have a long career at The Hershey Company, and feel that it’s a privilege and an obligation to give back where and when I can.”

Bentz and his wife grew up in the Reading area and raised their three now-adult daughters—Amy, Darcie and Courtney— in nearby Elizabethtown. Their family’s deep roots in the area and Bentz’s connection to his alma mater make it exciting for him to participate on Alvernia’s President’s Advisory Council and to see the Reading CollegeTowne plan unfold.

“While growing up in West Reading during the 1960s and 1970s, crossing the bridge to Penn Street was a big event during the holidays or to celebrate special occasions,” he said nostalgically, adding that his grandfather was an executive chef at the Crystal Restaurant for 30 years. “We had many special memories there. It would be great to see the area thrive again. I think the Reading CollegeTowne plan can be the cornerstone to a return to prosperity for downtown Reading.”

This article, authored by Claire Curry, originally appeared in the Winter 2021 issue of the Alvernia Magazine.

Solar Plexus
Loyack Letter: What is yours to do?
Raising Awareness to New Heights
Advancing opportunities
The quest to build a better game