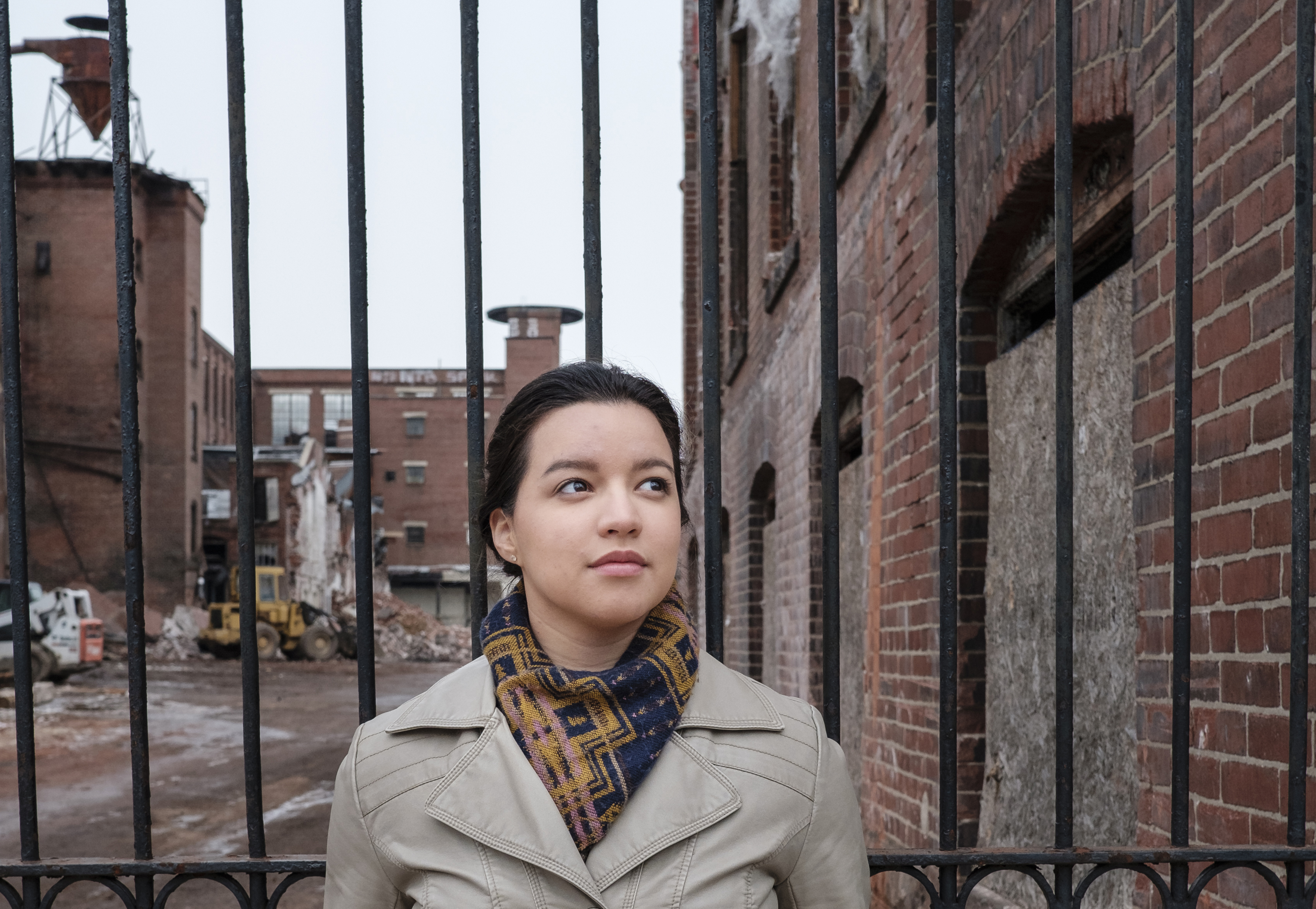 Launched in 2013, Alvernia’s Reading Collegiate Scholars Program provides up to 10 full, four-year scholarships to promising Reading-area students each year while also providing tutoring, mentoring and college application assistance to hundreds more in the inner-city school district. But the program is about much more than access to college. It’s about revitalizing the City of Reading by fostering its youth to become future leaders. From the first moment that Reading Scholars visit the university’s campus, they are fully supported by a cadre of faculty, staff and community mentors, with an end goal always in sight: to succeed and graduate with a life-changing degree.

With an almost perfect grade point average, Reading Scholar Syanashailyn Ortega is excited and has already launched her career with an internship-turned-permanent position in human resources at C.H. Briggs. Ortega’s mother, inspired by her daughter’s success, is putting the finishing touches on a degree at Reading Area Community College.

Ortega’s early days at Alvernia, however, were a different story.

“I was much less confident about myself when I first started here,” she said. “I felt like an outsider.”

Ortega never struggled academically at Alvernia, but adjusting socially was a challenge. It’s an issue that affects many first-generation college students, and one that often leads to early dropout.

“I didn’t really share experiences with a lot of the other students, so sometimes even conversations were difficult,” she said.

It took awhile, but gradually, Ortega learned to ask for help. She sought advice from community and faculty mentors with whom she was paired. She put to work the skills she’d learned during a two-week summer bridge program prior to the start of her freshman year.

“Looking back, I’m very appreciative for that strong support system,” she said. “Whenever I needed anything, there was somebody there to help me.”

With her undergraduate degree in hand, Ortega encouraged younger Reading Collegiate Scholars not to go it alone.

“We all have obligations and problems, and college can be hard,” she said. “I tell them to take advantage of the support systems that are in place.”

Datnilza Metz is a freshman who has faced an uphill struggle as she balances a rigorous academic schedule with family obligations and a work schedule that ranges from 35 to 45 hours a week.

Without help from advisors and faculty members, she feels that her first year may not have been successful.

“I hope that faculty members and staff know how much of an impact they have on us,” said Metz, who plans to open her own business after graduating.

“The faculty here have done everything they can to help me, and as a result, I’ve been able to participate in service trips and campus ministry while still working and keeping up with my classes and school work,” she said.

Providing the best support possible for Reading Collegiate Scholars is a priority, said David Myers, director of Alvernia’s O’Pake Institute for Ethics, Leadership and Public Service, which oversees the college success component of the Reading Scholars program. It’s a lesson from which Myers and Reading High School Principal Eric Turman ’97, M’03 hope other colleges can learn.

Turman, an Alvernia alumnus who has been principal of Reading High since 2011-12, described a wake-up call that came when he learned that of about 400 students from the Reading High Class of 2012 who went on to college, only 13 percent graduated in four years.

“I sort of got hit with reality then,” he said. “I had to look in the mirror and say, ‘You failed these kids.’”

It’s an issue mirrored around the country: awarding scholarships to deserving first-generation seniors is not enough, Myers said. While the scholarships enable them to enroll, much-needed support must be in place, or many of these students will fail. Balancing obstacles including extensive work schedules, financial concerns and family-dynamic issues with demanding academic schedules prove to be overwhelming for many of them.

“So we considered how we could effect change,” Myers said. “We deeply researched ideas that we could model and successful programs at other institutions.”

“It’s a huge network of support,” Myers said. “Clearly, it sometimes does take a village.”

Though the program will continue to evolve over time, Myers says it’s ready to serve as a model for other colleges.

At the request of Principal Turman, Alvernia hosted a forum — the first of several offered to peer institutions — exploring problems that first-generation, low-income college students face, and addressing ways of helping them overcome those obstacles.

Angel Helm, a community mentor and a graduate of Reading High School who also sits on the Alvernia board of trustees, said the program’s drive to transform as many lives as possible is at the heart of Alvernia’s mission.

“I could not be more proud of this program, of participating in it, or of the kids who are working hard every day to succeed in it,” Helm said.

Cynthia Rothenberger added that mentoring Reading Scholars has greatly increased her understanding of the difficulties they face and has made her far more sympathetic to obstacles encountered by all students. As an assistant professor of nursing and faculty mentor to the second cohort of Reading Collegiate Scholars, Rothenberger has become an unofficial mentor and advisor to all Scholars pursuing healthcare degrees.

“We don’t always see these things as faculty members, but there are a lot of students who are struggling and could really use support,” said Rothenberger.

For Juan Paula, a senior who will commission as a second lieutenant in the U.S. Marine Corps upon graduating, the scholarship and support he received as a Reading Scholar helped him remain on his career course.

“This has been an important chapter in my life,” Paula said. It’s a chapter that began with access and is closing with success. 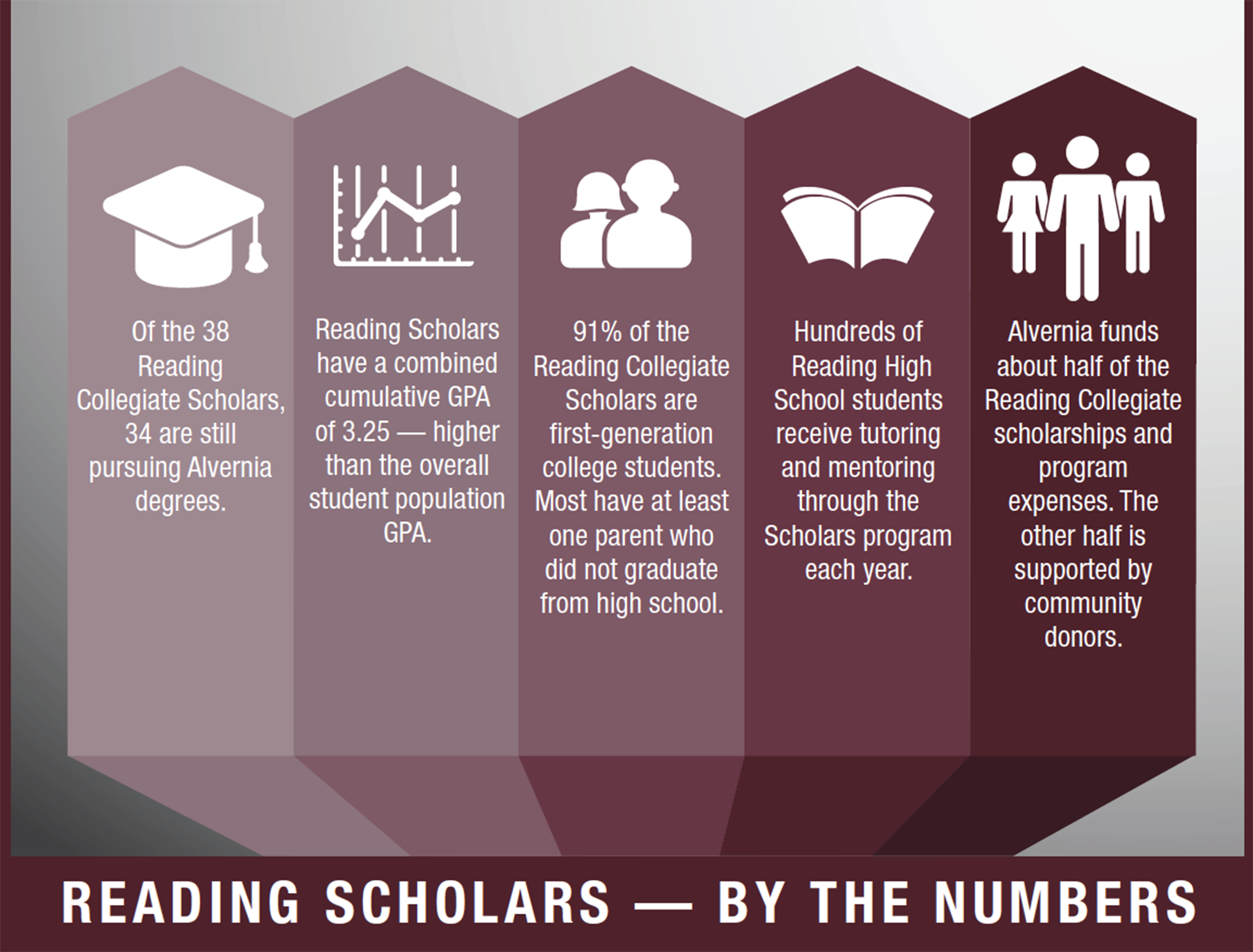