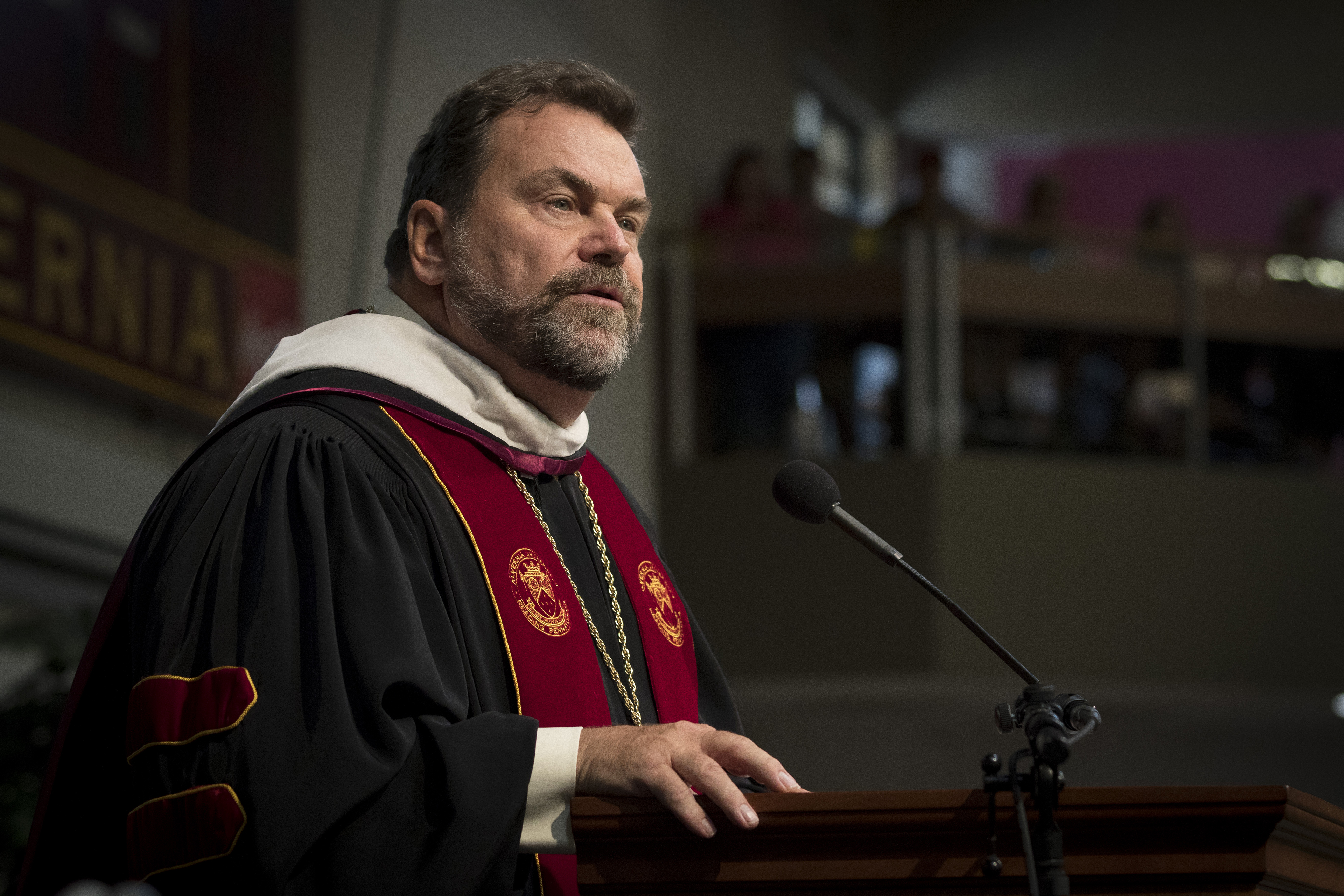 After 14 years of transformational leadership, the extraordinary journey of Thomas F. Flynn as president of Alvernia University will end June 2019. During his tenure as the longest serving president in Alvernia's history, guided by its inclusive Franciscan core values, the university became a comprehensive, regional university, now recognized as a national leader in community service and civic engagement.

"Tom has been unwavering in his commitment to our Franciscan mission, our identity as a Catholic university and the living legacy of our sponsors, the Bernardine Franciscan Sisters," said Kevin St. Cyr, chair of the board of trustees. "He has significantly raised Alvernia's visibility and reputation nationally, even as he has responded admirably to the board's mandate back in 2005 that he be actively engaged in the local community."

Under Flynn's leadership, Alvernia transitioned from a small, local college to a thriving comprehensive regional university, combining the benefits of a liberal arts college with many of the opportunities of a large university. Alvernia is consistently ranked by U.S. News and World Report as a top regional university in the North.

"The time is right for new leadership, as we successfully complete the strategic and campus master plans that have guided our progress between 2008 and 2018, and as we continue to shape Alvernia's future in ways not envisioned a decade ago," said Flynn on his departure. "I am grateful for the continual inspiration provided by our wonderful students and for the relationships on campus and in the community that have made this service so rewarding."

Since Flynn arrived on campus in 2005, he has taken the university to new heights. Major milestones under his leadership include:

• Alvernia' s emergence as a national model for civic engagement and interfaith dialogue, led by two endowed centers-the Holleran Center for Community and Global Engagement and the O'Pake Institute for Ethics, Leadership, and Public Service — that jointly sponsor the Reading Collegiate Scholars Program;

• Numerous partnerships both locally and internationally that have expanded the university's presence and positive impact, while ensuring 100% of Alvernia's undergraduates complete one or more "real world learning" opportunities;

• The doubling of the endowment and 13 years of all-inclusive, balanced budgets and financial stability amidst a turbulent environment; and

• Transformation of the campus itself, with a new campus entrance; Founder's Village and the Campus Commons; upgraded facilities for teaching and learning, fine arts, and athletics; and the PLEX (the Recreation, Wellness and Health Sciences Complex, a 100,000 square foot facility due to open fall 2019)-Alvernia's most ambitious project ever.

"For all of the significant contributions Tom has made to Alvernia's success and prosperity during his tenure, perhaps his greatest legacy will be the stability he has created by building a talented and effective management team and deepening a mutually respectful relationship with the Bernardine Franciscan Sisters," said Michael Fromm, CEO of Fromm Electric Supply Corp. and chair-elect of Alvernia's board of trustees. "And because he worked closely with board leaders to plan for this transition, we have already hired a national search firm. Alvernia is well positioned to select a president who will lead the university to even greater levels of achievement."

Flynn also has overseen the expansion of the faculty and increased support for their work as teacher-scholars as well as the addition of new undergraduate, master's and doctoral programs. Today, the university sponsors more than 50 fields of study, including three doctoral degree programs, multiple leadership offerings, and top programs in healthcare and human services like nursing and occupational therapy that boast strong student outcome measures.

"I will not be leaving Alvernia behind," said Flynn, 65, reflecting on the next stage of his life, including almost 20 years served as a college president. "I will continue to rejoice in the achievements of our students and alums and be a passionate advocate for Alvernia."

Flynn, who said he is looking forward to "living life differently," has been invited to become a part-time Senior Fellow for both the Association of Catholic Colleges and Universities and the Association of Governing Boards, helping mentor the next generation of leaders and strengthening shared governance for private universities. He and his wife Helen will remain in the area, making a new home in Reading.