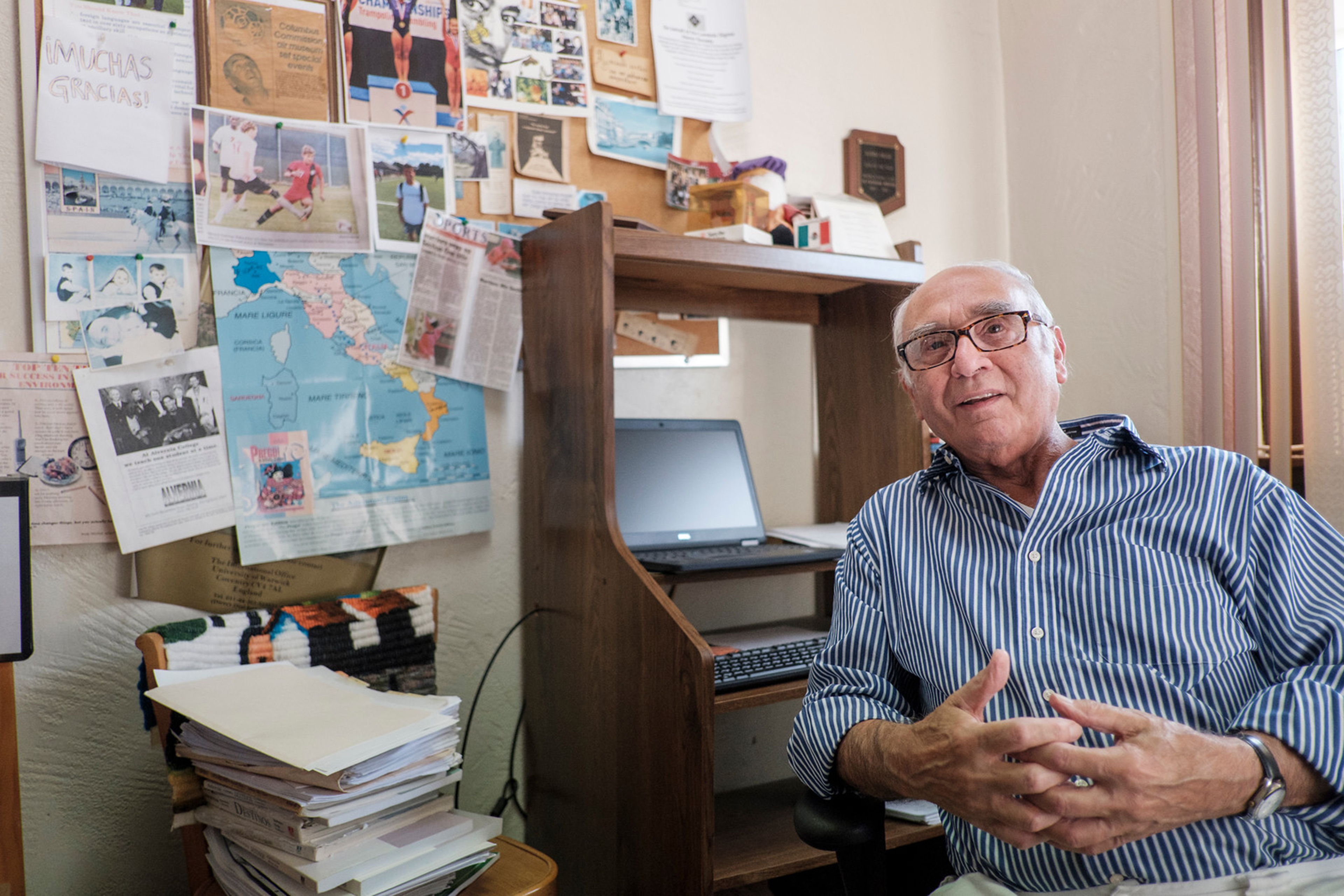 Professor Pietro DiStravolo remembers the first time he stepped onto Alvernia’s campus. “The atmosphere was beautiful and peaceful, and the approach — the friendship and love that the sisters gave their students — was so special,” he recalls. “I decided (if the sisters would keep me) it would be my place for life.”

They decided to keep him, and DiStravolo went on to spend the next 42 years at Alvernia. In those four decades, he has embodied the mission the Bernardine Sisters hoped to instill when they taught the first classes in Francis Hall: a diversity of thought, faith and culture — knowledge joined with love.

As chair of Alvernia’s Foreign Language Department, Sr. Florence in particular made a special impact on DiStravolo.

“Sister Florence means everything to me,” he says. “I had three kids when I started here. She took me in and guided me toward my master’s and my career at Alvernia. She was my inspiration and supported me in becoming chair.”

Working out of the same Francis Hall 226 office he’s been in since 1976, DiStravolo has taught Italian, Spanish for criminal justice majors and perhaps most importantly — a love of culture.

“Pietro is one of those kind souls who can see the good in every student,” says Sharon Blair, executive assistant in the Office of the Provost, who works down the hall from DiStravolo. “He goes way beyond to encourage students and connect with them one on one.”

Today, as he prepares for a gradual retirement, he reflects on his years on an ever-evolving campus.

A home away from home

Originally built as an orphanage in 1926, Francis Hall was a multipurpose hub by the time DiStravolo joined the fledgling college in the 1970s. “It housed everything — the registrar, the cafeteria, the classrooms, the faculty offices … even the sisters’ bedrooms,” he says.

He remembers nuns in bathrobes scurrying past his office on the way to the showers. “Actually, I think back then it was a tub,” he says.

At the time, he shared his office with two other professors.“ We sat at what I called ‘Mickey Mouse desks.’ They were tiny with little wooden chairs,” he says. Though he now has the office all to himself, DiStravolo still keeps one of those chairs as a memento.

As he thinks of the building, DiStravolo also talks of the free spaghetti and meatball dinners in the basement cafeteria that brought the then 15 or so professors together to rub elbows and deepen relationships. The pay wasn’t great back then, and there were no benefits, no tenure and no promotion scale. But the atmosphere was rich.

DiStravolo contributed to that richness in many ways. For one, he brought cultural events to campus and to the Reading area as a whole. “I did a lot of activities to unite Alvernia with the surrounding community,” he says.

Having spent his first 27 years in Italy, he speaks proudly of the Italian Festival, which attracted thousands of people to campus in the 1980s to celebrate Italian culture with food, dancing, parachuting, fireworks and fancy Italian cars.

He was part of a small team that formed the Italian Heritage Council, which has given many scholarships to Alvernia students over the years and brought famous speakers to campus. Unsurprisingly, DiStravolo was elected as the council’s first president — a role he still fulfills today.

As part of his role in the International Club, DiStravolo served as the faculty advisor for students interested in studying abroad in Italy and Spain. He also chaperoned student groups to the Dominican Republic for spring break, where they taught English as a second language to children and adults. “The Dominican families and kids loved to interact with the American young people!” he says.

In between classes and events, DiStravolo and a few students kicked the soccer ball around behind Francis Hall. “At the time, we didn’t care if the ball was oval or round,” he jokes. But that small, informal group turned into a full-fledged soccer program at Alvernia.

And for his fellow faculty members, DiStravolo served as the first vice president of the Faculty Council, working to establish the benefits, tenure and contracts his colleagues deserved.

“I have loved my time here,” he says. “In the summers, I couldn’t wait for fall because I’d want to go back to campus and be with the students.”

It’s a passion he passed on to other family members. One of his three daughters taught Spanish at Alvernia for a stint and joined her dad on an alternative spring break program to the Dominican Republic. And his wife of 54 years, Elisabetta, earned her education degree from Alvernia in 1987, hand-delivered by her husband.

“I will always be thankful to Sister Dolorey (Alvernia’s third president) for allowing me to get on stage to surprise my wife by presenting her with that degree,” he says.

When he looks at the Alvernia of today versus the place he joined 42 years ago, DiStravolo says, “Like anything else, everything has changed.”  The university has grown in students, academic programs — and thanks in part to DiStravolo, cultural reach. Much to the disappointment of many students and colleagues like Blair, it looks like DiStravolo’s time here is winding down.

His presence, however, will live forever, in the Italian room he helped create in the library, in the cultural outreach he shaped, and in the hearts and minds of the many students he’s made an impact on over the years. “I will never go away,” he laughs.