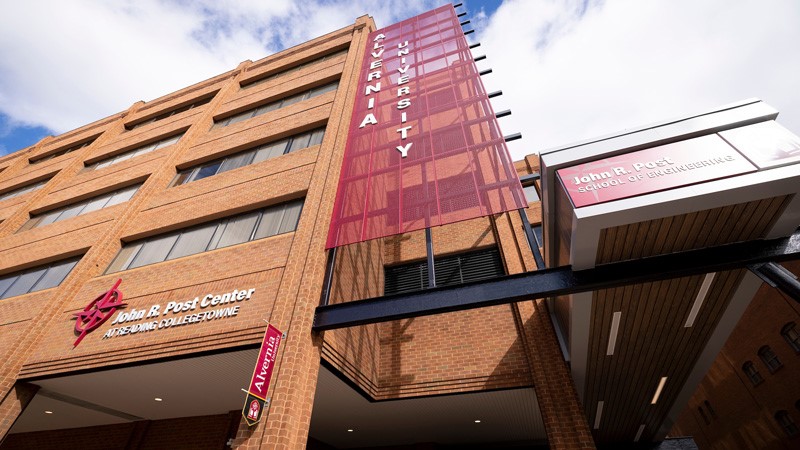 Alvernia receives a $7.5 million grant from the Pennsylvania Redevelopment Assistance Capital Program (RACP) grant for the second phase of renovation of the John R. Post Center at Reading CollegeTowne. This marks the largest grant in university history. To date, Alvernia has secured a total of $15.5 million in redevelopment grant resources for the CollegeTowne initiatives in Reading and Pottsville. The award was among a number announced today by Gov. Tom Wolf’s office.

“The community’s belief in the transformative power of the Alvernia experience and CollegeTowne initiative is highlighted by today’s historic grant,” said Alvernia University President John R. Loyack. “We are eternally grateful for this funding that will continue to reshape the future of Reading and we owe a special thanks to State Representative Manny Guzman, Senator Judy Schwank, Governor Wolf, Speaker Culter, all the Berks County Representatives and countless other elected officials and their respective teams for their belief in our collective vision.”

The grant award is the fourth of its kind for the university after it secured a $4 million RACP grant in December 2020, $1 million in 2021 and $3 million for Pottsville CollegeTowne in late 2021. the largest grant in the university’s 63-year history.

The university launched the CollegeTowne initiative in Reading in late 2019. Since its launch, Alvernia purchased the newly renamed John R. Post Center at Reading CollegeTowne, a 240,000-square-foot living and learning facility at 401 Penn Street in downtown Reading, and completed the first phase of a $20 million renovation and retrofitting project. During that time the university has also assisted over 200 entrepreneurs, small and established businesses through the O’Pake Institute for Economic Development and Entrepreneurship’s Spark Business Incubator and has spurred six other development projects in vacant or abandoned buildings that have resulted in nearly 1,500,000 square feet of transformation in the downtown corridor.

Plans for the second phase of CollegeTowne include the addition of a physician associate program, a refresh of the nursing program, the addition of a community clinic, additional engineering tracks, and expansion of downtown housing.

RACP is administered by the Office of the Budget for the acquisition and construction of regional economic, cultural, civic, recreational and historical improvement projects. RACP projects are authorized in the Redevelopment Assistance section of a Capital Budget Itemization Act, have a regional or multi-jurisdictional impact, and generate substantial increases or maintain current levels of employment, tax revenues, or other measures of economic activity.