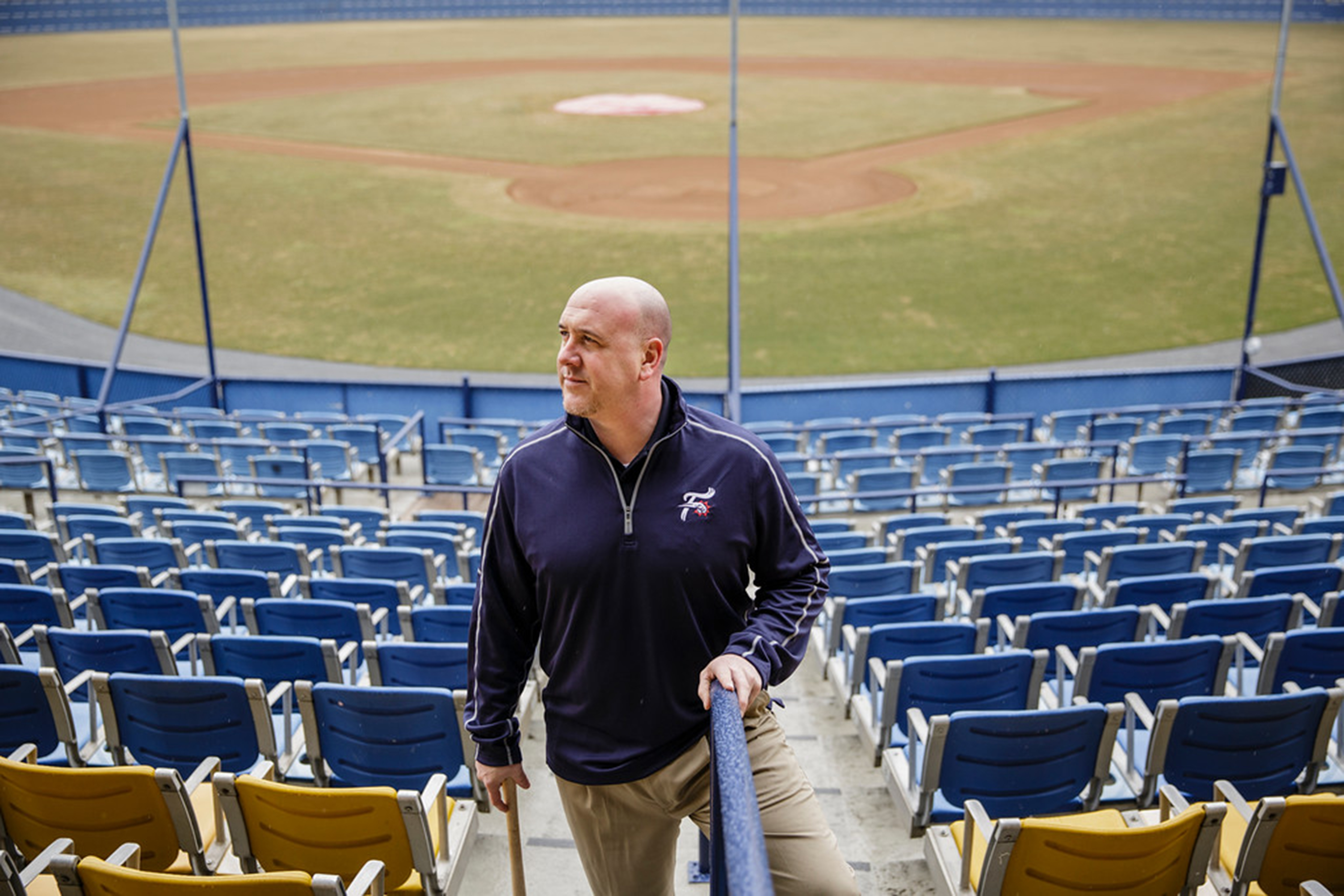 Most Little Leaguers dream of graduating from the local sandlot to the big city stadium. They fantasize about crashing into the Green Monster, rounding bases at Wrigley and crushing it at Candlestick.

But then reality sets in. They settle for watching the great American pastime on their jumbo flat screens, and stealing second base from the comfort of an overstuffed couch. Kevin Sklenarik wasn’t one to settle.

While the former Crusader all-star didn’t quite make it to The Show (his heart was set on starting as shortstop for the New York Yankees), he’s likely had a bigger impact on the sport, albeit from a very different vantage point — as a front-office executive for the jewel of MLB’s minor league system, the Reading Fightin Phils.

In December, the Alvernia ’96 grad was named Executive Director of Baseball Operations and Merchandise, adding to the other responsibilities he has had in his 20-year career with the highly acclaimed minor league team. In his role, Sklenarik oversees the Reading team’s merchandise and team store. He also works directly with the Philadelphia Phillies organization to handle travel and logistical plans when players are called up to the majors from the Fightin Phils.

Last season, while playing golf with Fightin Phils catcher Logan Moore, he got a call announcing teammate Aaron Altherr was being pulled up to the big leagues. He said Moore was surprised and happy to hear the news. “When you go to the big leagues,” Sklenarik said, “it is the opportunity of a lifetime.”

Sklenarik also arranges travel for the Reading team, which journeys by bus as far west as Akron, Ohio, and as far north as Portland, Maine. And while working for the Philadelphia Phillies organization is a dream come true, he is the first to say that it’s not all popcorn, peanuts and Cracker Jacks.

Between April and August, the schedule is “pretty much 24/7 every week, always on call,” Sklenarik said. “The rest of the year is pretty busy too,” he said. But it does have perks — like the time A Rod came to town in 2013.

“When we found out he was rehabbing, we were looking at the schedule, kidding around and saying that we might get the chance for Alex Rodriguez to play here,” said Sklenarik, explaining the Florida State League and AAA were on an all-star break at the time.

“We were the only team playing at the time. Sure enough we got a call from one of the Yankees strength coaches who told us that Alex was going to be in Reading for a few days.

“It was a neat experience to get to meet him. My son got to be the batboy that day and see how A Rod goes about his business. Whether you like him or not, he’s still Alex Rodriguez.”

Sklenarik credited his wife, Georgeiann (Sheaman), a ’95 Alvernia alumna and teacher at Royersford’s Spring-Ford School District, with being the rock holding the family together. They are the parents of Nicholas, 15, and Abigail, 11.

“I’m fortunate,” Sklenarik said. “A lot of people get up to go to work. I get up and go to work I enjoy.” But Sklenarik notes that he sometimes spends more time with his co-workers than he does his own family during the season.

“Whatever you want to do in life, put your heart and soul into it. You have to enjoy it, and you have to like it. I don’t look at it as work. I look at it as something I really enjoy. Just don’t let my bosses know that.”

At 42, Sklenarik reflected about what it takes to work in minor league baseball: “I tell young kids to do sports internships to get a feel for what it is like. It’s not all glory. It’s hard work and long hours. I didn’t start out as an executive director. I started at the bottom and worked up. I’m proud of the last 20 years.”

During games, Sklenarik says it’s all business. “No two games are ever the same. When the game starts, I make sure I’m around the players and see if they need anything. I look over the team store and make sure everything’s okay.

“During games we do promotions on the field, like using the T-shirt slingshot or the sumo wrestlers (a crowd favorite). Every game offers great entertainment for the fans. We never stop trying to impress the crowd.”

At Alvernia, he got direction from Beth DeMeo, chair of the English and communication department, who shepherded the green horn communication major.

“My courses at Alvernia provided me with an important foundation and afforded me the opportunity to get a foot in the door,” said Sklenarik, who started as a college senior at the Phils farm team. “My sports internship through Alvernia was the beginning of my career. You’ll make mistakes. Just don’t make them again. You’ll learn from them and be better because of it.”