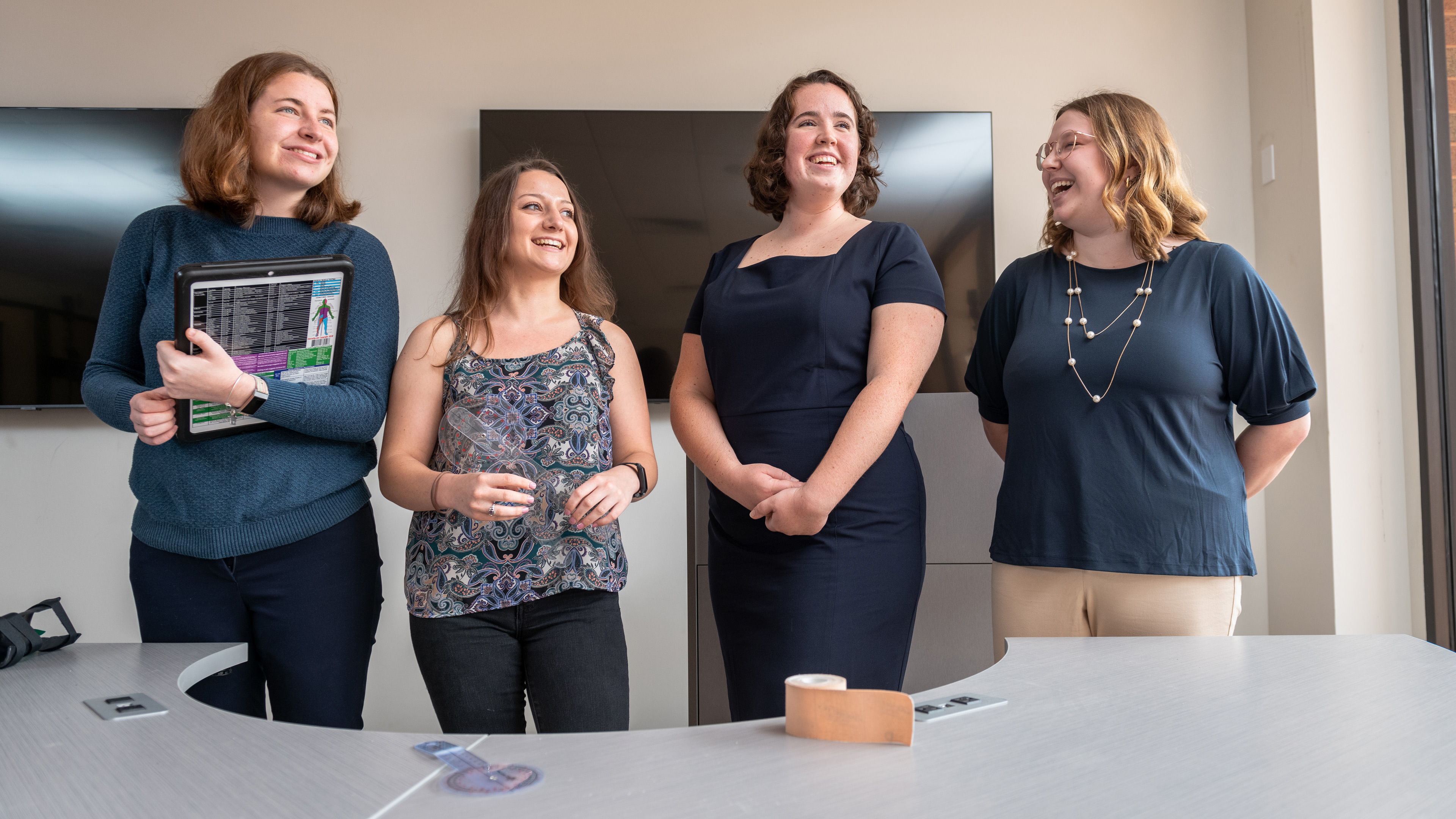 Four Alvernia University occupational therapy majors are transforming an idea into a patented product and a business. They will be the first to tell you that their invention would likely not have moved beyond the idea stage without the O'Pake Institute for Economic Development and Entrepreneurship.

Particularly for them, the O'Pake Institute's technology transfer process was key in incubating an excellent idea toward a patented product.

Samantha Burns, Antonia Trupio, Cecilia Roling and Sarah Rothenberger are the O'Pake Institute's first student entrepreneurs to enter the technology transfer process. Their invention began as a class project and was molded by their faculty advisor and now partner, Dr. Greg Chown.

Because their product has entered the patent process, few details could be revealed, but the young entrepreneurs did speak enthusiastically about how the O'Pake Institute set them up for success.

A hands-on problem evoked the product idea, said Rothenberger. “I remember thinking, I wish my patients had something to tell them when they're not following their treatment accurately,” she said.

According to Burns, the team concurred that the problem needed a solution.

Rothenberger said Chown's advice at that stage was invaluable. “He had so much experience in the field, so we were able to trust him to give us a good opinion,” Rothenberger said.

Chown brought the team to Dr. Ridley and, after hearing their pitch, he determined they potentially had a great idea. Ridley then assigned the group to Student and Client Services at O'Pake, explained Ashley Abbey, graduate assistant for student and client services.

Abbey pointed out that O'Pake is “adamant that we provide experiential learning to complement what students learn in the classroom.”

Chown said his initial role was to act as an advisor, and he's continued working with the team on the clinical application of their idea in rehab and recovery. “Now that the project is further along, and they've formed their company, my role is that of consultant,” he explained.

Another big step forward came from Dr. Rodney Ridley, COO of O'Pake Institute. Roling explained that Ridley suggested their product could serve athletes, who are always pushing to get back in the game when injured.

Ridley lives the culture of entrepreneurship he aims to bring to Alvernia. The former engineering professor holds 27 U.S. patents. In 2017 he was named Pennsylvania Acceleration Educator of the Year.

“Student entrepreneurs at Alvernia benefit from a wide range of services and expertise we possess internally, but more importantly, it is the network we've created in the community that wields the true power of the incubation process,” said Ridley. “From engineering partners like East Penn Manufacturing that can advise on prototype creation, to the members of our funding network like Visions FCU, Riverfront FCU and Community First Fund that can provide access to early-stage funding, our student entrepreneurs are supported every step of the way.”

Trupio said O'Pake stepped in with training as the team progressed in developing their product into a business. She and the others acknowledged they lacked certain knowledge sets. Tech Transfer addressed that.

“At a certain point, we realized we were in over our heads in the business world,” said Rothenberger. “It was a lot more complicated than we thought.”

Tech transfer is a focus at O'Pake because people who've successfully developed and patented inventions, like Ridley, know that having an idea isn't enough, no matter how earth-moving. Technology transfer is rooted in the realization that universities must nurture discoveries into marketable products and services—it doesn't just happen.

As part of the experience, the team of occupational therapists received training in finance and “health informatics,” learning terms that were all new to them, Burns explained.

“Working with O'Pake has enabled us to transform a classroom project into a business and a future career that none of us expected,” Trupio said. She added, “I cannot wait to see what is in store for our team next.”

Roling expressed the same excitement: “Working with the O'Pake Institute on making a real product that can help our clients is a blessing. I cannot wait to see what else we will achieve with the O'Pake team.”

Now, O'Pake has helped the group prepare to impress investors and the local business community as they look to secure funding for prototype development and the legal fees associated with the business's start-up.

The end of the journey will come when the product is out there. “When it's on the market when we go to work, and we use our product, that will be our ultimate ‘done,'” said Rothenberger.