The Making of a Mascot

Rising to the challenge of an unprecedented task, 22 people representing every corner of the university community took on an inclusive, whirlwind process of choosing a new Franciscan nickname for Alvernia University. Fortunately, one name — the Golden Wolves — continued to rise to the surface.

For nearly four decades, thousands of Alvernia athletes have played under the Crusaders name or stood in the stands cheering on Crusaders teams. The nickname had become part of Alvernia’s identity and history. So it’s no surprise that some within the Alvernia community initially resisted the idea of a name change.

But once they heard that the university’s founding Bernardine Franciscan Sisters proposed the change, community members sought to better understand the reasoning behind the request. And not so slowly, many students, faculty and alumni embraced the need for a new university nickname.

“The idea of changing the name has been brewing for quite some time because there was a lot of prejudice and persecution associated with the Crusades, and that’s not what Alvernia stands for,” explained Sr. Madonna Marie Harvath, a member of the Bernardine Sisters leadership team. “Alvernia’s patron, St. Francis of Assisi, marked a major transition in his spiritual journey when he turned away from the Crusades and pursued a path of peacemaking.

“Almost all of the sisters felt strongly that the name should be changed. We want the nickname to be something that we’re proud of that really speaks of our values more than something that was oppressive,” Sr. Madonna said.

“Although I’m not Roman Catholic, I have the utmost respect for the sisters who founded this university,” said Tom Porrazzo, Ph.D., program director and longtime associate professor of athletic training at Alvernia. “It’s a small thing we could do for these extraordinary women who have done so much for others.”

Once the decision to change the nickname was made, Alvernia was determined to give everyone a voice in the process of choosing a new Franciscan name. A 22-member task force with representation from every possible constituent group — students, faculty, athletic and other staff, Bernardine Sisters, alumni, trustees, board members and parents — was appointed to create an open process with ample opportunities for input from others.

Community members suggesting potential nicknames were asked to explain how their ideas melded with four important principles. Plausible nicknames would connect to Alvernia’s Franciscan heritage and values, enhance the university’s visibility and institutional image, be gender neutral, and expand enthusiasm for Alvernia athletics.

But even with more than 250 submissions, one suggestion seemed to stand out early: 58 percent of the 145 unique nicknames suggested some variation of “wolves.”

Over and over, submitters recounted the story of St. Francis and the Wolf of Gubbio.

“I learned of this story in my FYS class last year and it really hit me and made me look at life in a different way,” read one student submission. “Alvernia has the mission of facilitating ethical leaders with moral courage — and St. Francis exhibited these traits when he took the initiative of connecting with the wolf and making peace with it and the people,” read another.

All members of the task force individually graded each unique name based on the four guiding principles before culling the list down to 5-8 nicknames as a group. Determined not to make such an important decision in a vacuum, the task force facilitated focus groups that — like the task force — represented members of the entire university community. In-depth research and vetting of the remaining names were conducted simultaneously. With feedback and research in hand, task force co-chairs Porrazzo and Anthony DeMarco, vice president for institutional advancement, engaged the team in a passionate debate about each remaining name.

“Trying to choose something fierce enough for a sports team that also aligned with Alvernia’s values and the four criteria was one of the biggest challenges,” said Cameron Coons ’17, who represented student-athletes on the task force as a senior baseball player and president of the Student Athlete Advisory Council. “No athletic team wants to be the ‘Purple Butterflies’ or something like that.”

Former basketball player and coach Christopher Davis ’16, a task force member representing graduate students, said that looking at nicknames through so many different perspectives added greatly to the experience. “It’ll take some getting used to, but I think it’s a good direction moving forward for the university and for athletics,” he said.

President Flynn expressed gratitude for the task force’s thoroughness. “For me, the final decision was easy because of the inclusiveness of the process and the overwhelming consensus by all groups.”

According to the Wolf of Gubbio legend, St. Francis of Assisi negotiated peace in the early 13th century between the townspeople of Gubbio and a wolf that had been terrorizing the town. Francis proposed that the town could feed the wolf and, in return, the wolf would stop killing the people and their livestock. “Remember, our Savior taught forgiveness,” said Francis. “He taught us to love our enemies.” The townspeople agreed, and brother wolf peacefully lived out his last years in Gubbio.

“I really like the new name because wolves relates to the Franciscan story and speaks of peace,” said Sr. Madonna. “It’s a very well known story in the Franciscan history. We thought it was a very good choice, as it connects with the Franciscan value and can be used with the sports teams.”

“The story of St. Francis and the Wolf of Gubbio presents countless opportunities for us to emphasize our Franciscan heritage,” agreed Flynn. “And the word ‘golden’ not only touches on our school colors but also signifies excellence.” Serendipitously, AU is the scientific symbol for gold.

“It’s always hard when you’re making a change to your identity,” said Victoria Williams, Ph.D., associate professor of political science and director of the honors program. “But from my perspective, it’s been pretty enthusiastically received. I expect to hear a lot of howling at our sporting events.” 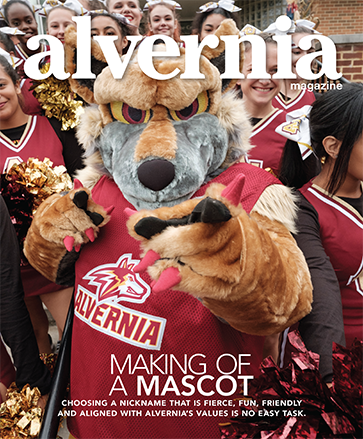