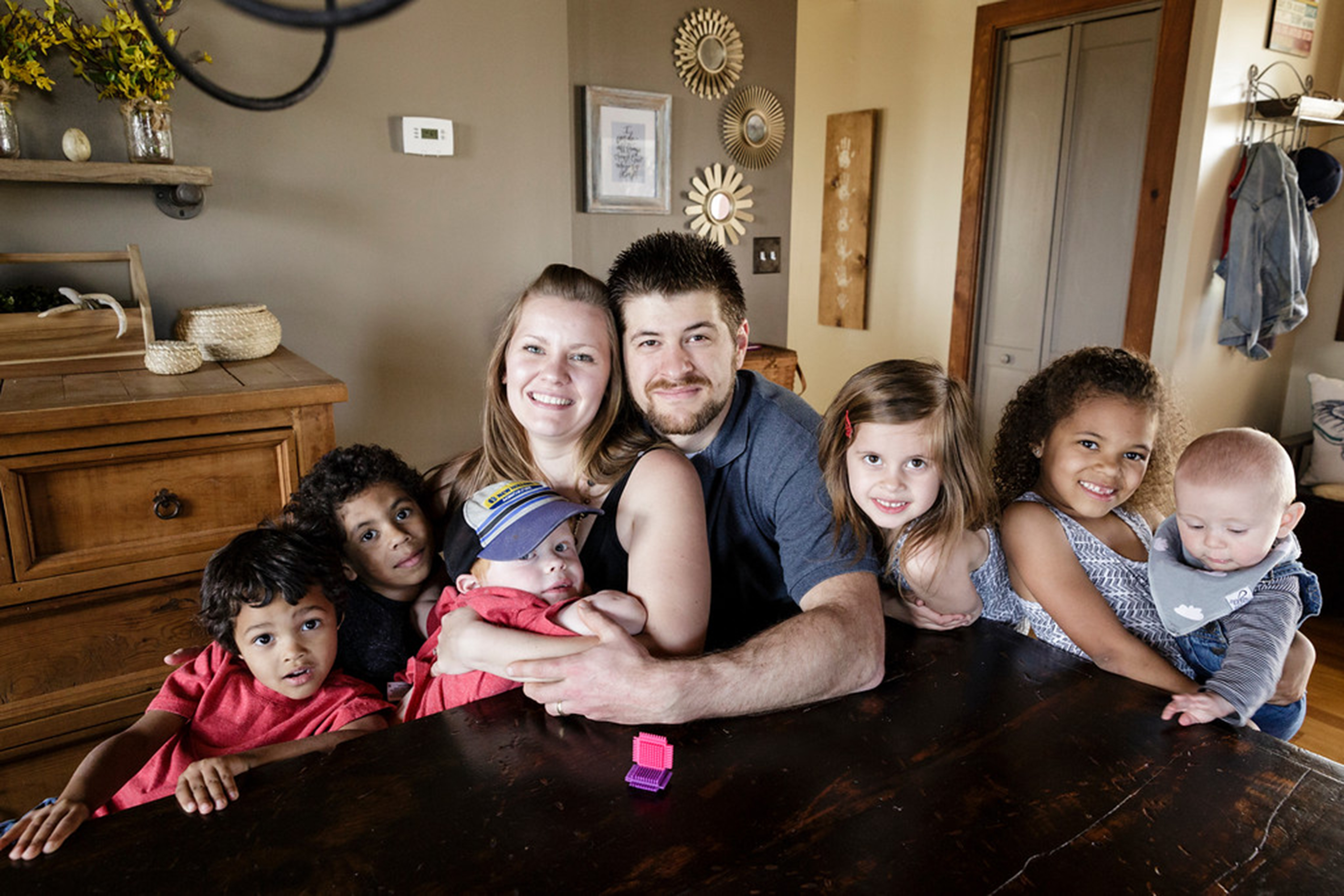 “It’s our ordinary,” explains Tim Chrusch when asked about the challenges of raising six children, all under the age of 10. “Maybe it takes longer when we want to do something like play in the snow, but it’s all we know.”

While it’s all Tim and his wife, Monica, know, it is not quite what they expected. In the beginning, their life was going according to plan. Together since middle school, they wanted to stay local for college. “We went to a small school district and wanted the same experience for college,” Monica says. They both enjoyed the small classes at Alvernia, where Tim majored in business and Monica studied elementary and special education.

After college, their plan was to start a family. Monica is a planner — almost obsessively so — by nature. But early on, she realized she needed to be more adaptable. In a May 2015 blog post, Monica explains how she came to understand this: “The plan. We all have one. This idea in our head about how our life is going to be. My plan was wonderful. I was going to marry the man of my dreams. We were going to get pregnant soon after with our first child and then, every two years or so after that, we would add another little person to our family until we felt complete. Perfection, right? But, you see, that was Monica’s plan, not God’s plan.”

Following God’s plan
Early in their marriage, the couple tried to have children, but Monica miscarried several times (over the course of building their family, they would experience a dozen pregnancy losses). “Monica had no problem getting pregnant but couldn’t carry a baby full term. It was devastating,” Tim says. They tried infertility treatments for a short period and at the same time started the adoption process.

According to both Tim and Monica, adoption was part of their plan after they had their own kids. “Tim talked about trying foster care, but I was scared about how I would react when the kids would go back,” Monica recalls. “But when we went to the classes and heard other people’s stories, it became more to us than just having a baby. We saw there was a need for this.”

In early 2010, they received a call about a little boy named Gavin, who was medically fragile. They had Gavin in their lives for a few months before he passed away that April. Later that same year, in July, two siblings, Isaiah (now 9) and Hope (now 8), were placed with them. They were adopted in October 2012. Monica felt their plans were finally coming to pass.

Then came another twist: Shortly after the adoption, they learned that Monica was pregnant. This time, she was able to carry the child full term, delivering a baby girl they named Collins, who is now 5.

With three young children, Monica quit her job as a teacher at a Montessori school. Tim, who describes himself as old-fashioned, became the sole breadwinner — which was according to his plan. “I see myself as a provider and a protector,” he says. “In today’s society, you often see two people working outside the house. I wanted Monica to be able to watch our children grow and be home with them.”

And their family continued to grow. “After Collins was born, we tried again, and it didn’t work. When she was 14 months old, we put our names on the adoption list,” says Monica. “A few days later, we were picking up a new baby boy, Brantley.”

And then came yet another plot twist: When Brantley was just 6 days old, they learned that Monica was pregnant again. Their son Garin arrived eight months later. A few years later, their sixth child, Noah (now 6 months) was born.

A good routine and a whole lot of coffee
As the oldest kids approached school age, the Chrusches decided to homeschool them. Their oldest, Isaiah, was diagnosed with fetal alcohol syndrome and has an intellectual disability. They initially sent him to school, but it wasn’t meeting his needs. “It was very stressful for all of us,” Monica explains. “Honestly, homeschooling was something we always thought we would do.”

Monica’s education degree has been put to good use. “In Pennsylvania, you don’t need an education background to homeschool, but it has been a reassurance to me that I know what I’m doing,” she says.

The biggest challenge was establishing a routine. The kids have adapted well and are thriving. “Isaiah is much better. He is able to be himself at home,” Monica says. “He and Hope are in the second grade, and Collins is in kindergarten.”

The family is a stickler for routine in other areas. Tim gets home from his job as a product manager at EnerSys every day at 4:45. The family owns a small farm and spend quality time together enjoying their horses, chickens, ducks and dogs. Tim relishes this and says the best part of being a dad is “watching your kids grow and being an important part of their lives and someone they look up to.”

They put the kids to bed every night at seven so they can take time for themselves. Their family life works in large part because of the solid partnership Tim and Monica have nurtured.

While Monica credits “a lot of coffee and the grace of God” for her being able to care for their family, Tim says it is because “she is the most caring and compassionate person I know.”

Monica laughs when people tell her she must be so patient. Instead, she insists, Tim is the patient one. “Tim has this way of calming me down and making it all okay,” she says. “Every time there is a roadblock, he tells me it’s going to work out as it is supposed to.” And he has been right every time, she says, just as they planned.