Since January, 63-year-old Sr. Brigid Scott, OSF, has been residing in Reading. She is here on a short-term assignment, to translate some international meetings from Portuguese into English, in service to her congregation of the Bernardine Franciscan Sisters. At the same time, she has plunged in to help at the Mother Veronica Resource Center in urban Reading, where the sisters provide help and education to “all who come looking for a new way forward.”

Sr. Brigid teaches in the GED program there, helping adults earn a high school equivalency credential. “I like translating, but I also like working vocationally with the people,” Sr. Brigid explains. “That’s what I did in Brazil for 11 years.” It’s mission work typical of the Bernardine Sisters who founded Alvernia.

A World of Experiences
Born in Scotland, Sr. Brigid lived in Australia and then Canada, where French and English were both school requirements. A lover of languages, she says, “I also learned Latin, which I like and still review, because it helps in learning other languages.” The already well-traveled sister once spent six months on her own in the Dominican Republic, where she served as a layperson in a mission project. “I picked up the Spanish,” she casually says.

In 2002, she worked under the auspices of the Comboni Fathers in Brazil, a program for Catholic laypersons of all ages looking for longer-term volunteer service. An intensive three-month Portuguese language program undertaken in Brasilia equipped her to begin to work in several locations, including a library started and run by Sr. Claude Marie Jablonski, OSF (who is now in Reading) for children and adolescents in a very poor area of Fortaleza, Ceará. She enjoyed her work there, especially knowing “some of the children have no other access to children’s literature, and the library fosters a love for reading.”

“It’s because I had met her (Sr. Claude Marie) that I knew of the Bernardine Sisters,” Sr. Brigid remembers. “I applied to join them as what they call an ‘adult vocation’ 10 years ago this year.” She completed her novitiate in Joliet, Ill., by performing several internships. “When I took my first vows, in 2009, I went back to Brazil, doing vocational work in the northeast for two years and then in the south for five years. During that time, I lived at our provincial house in Porto Alegre.” Her work there included translation for the congregation. Also, at the request of the archbishop, she served with a mission project helping incarcerated youth, a population in dire need of the help.

Sr. Brigid’s early life gave her a taste for experiencing cultures, which has stayed with her and grown through the years. “I’m just curious,” she says, “and want to know and understand. I like to be with the people.” Sr. Brigid believes she will be reassigned to Brazil in August. “I know I’m being helpful to the congregation here, and I’m needed for translating,” she says. “I’m happy to do that.” But she really enjoys being out in the field, interacting with people in different countries. Her “real dream” is to go to the mission in Mozambique and work with the women there. Sr. Brigid has already worked in Malawi, so it would not be her first time working in Africa.

What’s Next
When she looks back over her life, Sr. Brigid realizes that at times she has done things that others, including her mother, deemed “too adventurous.” But she believes, “You have to listen to what you really believe is right for you. I guess I would say you have to have the courage of your dreams.” Now, after a lifetime of courageous choices that have taken her to so many locations, she says, “You start to see the pattern, how God is leading you.” She finds that “comforting — and also I’m curious to see where this is going.” 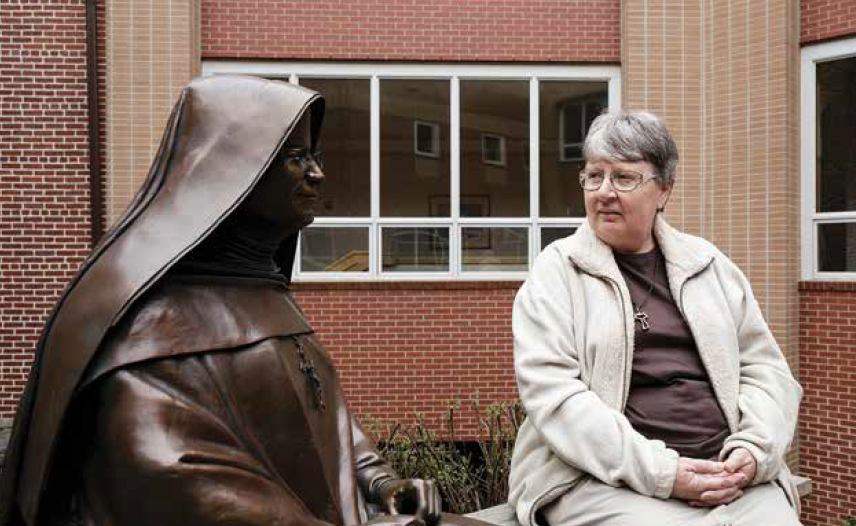