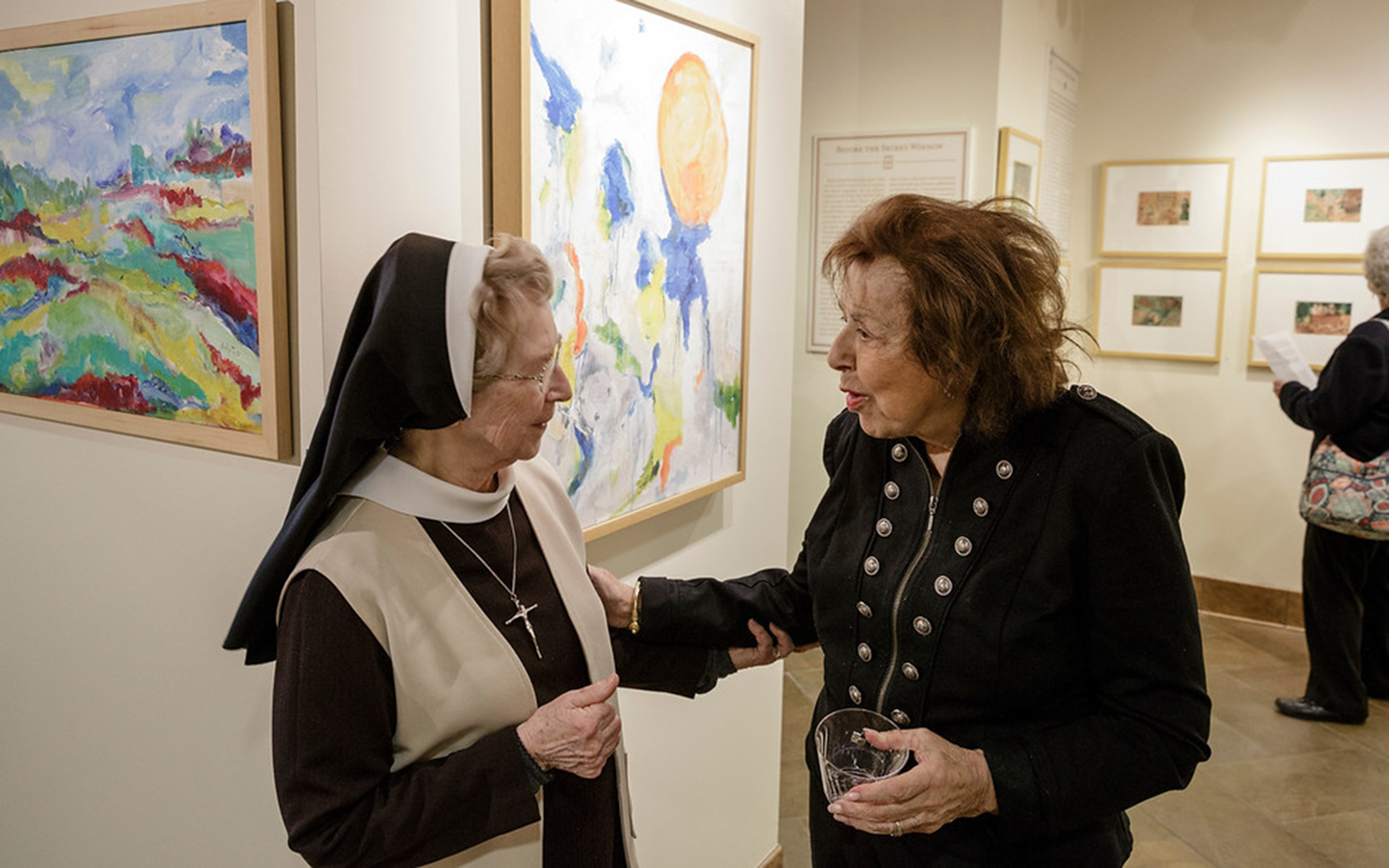 Nelly Toll, who first started painting as a child hiding from the Nazis, boldly captures her life

“I looked for the future,” Dr. Nelly Toll answered when an Alvernia student asked what she thought about as a six-year-old hiding from Nazi soldiers during World War II. From this octogenarian artist, it’s a characteristically simple answer that needs to be unpacked. For “a bratty little kid,” as she described her young self, it must have been a hard task to perform every day during a year and a half of being virtually imprisoned in 1943 and 1944.

Hidden in plain sight
Toll and her parents were forced with other Jews to live in Poland’s Lwów Ghetto when the Germans occupied the area. Her father hid his wife and child in an apartment with a Catholic couple eager to repay him for providing lodging when they were destitute. Together, they constructed a “secret room” by bricking up a street-facing window and hanging a kilim carpet on the inside.

The shallow windowsill provided a fragile shelter for the mother and child when Germans came to search the apartment for Jews. “Even a little breathing might have made the carpet flutter and given us away,” Toll said. “The whole time we were in hiding, we had to whisper. ‘The walls have ears,’ my mother warned me. You see, anyone might have betrayed us.”

Unable to let her child leave the room, play with other children or even be seen at the window, Toll’s mother did her best to comfort the child. “She was my mother, my doctor, my sister, my friend,” Toll wistfully recalled about what was an incredibly fearful time. The Catholic woman who helped hide them supplied her with books and, most importantly, a watercolor set.

Toll busied herself for hours by illustrating stories she made up and then sewing the illustrations into little booklets. “These characters became my friends,” she said. ”The art kept me satisfied.” Today, her fanciful, brightly colored paintings of princesses, schoolgirls and families give no hint of the difficulties she faced each day, until the Russians finally liberated the town.

Sadly, Toll’s father never returned for her and her mother, and they moved to Paris and Czechoslovakia and then settled in Amsterdam, where Nelly, then a teenager, studied fashion illustration. Her mother had remarried, and her new husband’s brother in New York helped the family make its way to America. Toll studied at Glassboro State College (now Rowan University), Rutgers University, where she earned a master’s degree, and the University of Pennsylvania, where she obtained her doctorate.

Exhibited for your consideration
Forty-eight framed images exhibited in Alvernia’s Miller Gallery this spring “were part of the largest extant body of work from one child during the Holocaust,” noted Peter Rampson, associate professor of graphic art, who first read about Toll in the New York Times last year and was instrumental in bringing the exhibition to Alvernia. “It’s remarkable. We installed it so viewers could look at the work first as art, and if they chose, also go deeper and learn about its context in history.”

These days, Toll, who lives with her husband in Voorhees, N.J., is an adjunct professor at the University of Pennsylvania. She continues to paint, now in a bold, abstract style inspired by work she saw at the Guggenheim Museum in Bilbao, Spain. Her recent work vibrates with color. “I like color,” she emphasized. You can hear the joie de vivre in the voice of the artist whose life was threatened at an early age.

In her work today, Toll strives for big effects and active surfaces. Restless, interlocking areas of color push the eye to explore the whole composition and travel with the viewer. Those who look closely will often see handwritten words energetically scrawled in the paintings. “Blue sky for everyone,” one painting proclaims. “Always see your life full,” another advises. Her collages feature images from famous painters’ works juxtaposed with reproductions from her childhood illustrations, as if the works are in a conversation.

In her work, Toll often depicts clocks, a symbol she says she appropriated from American artist Robert Rauschenberg. When asked about the symbol’s meaning, she said, “The clock showed time going by.” Despite her stirring personal account of her early years and this exhibition of childhood paintings, Toll is not enmeshed in the past. For her, it seems to be “something that happened,” past tense. She chooses to be an active artist who clearly still has her eye on the future.