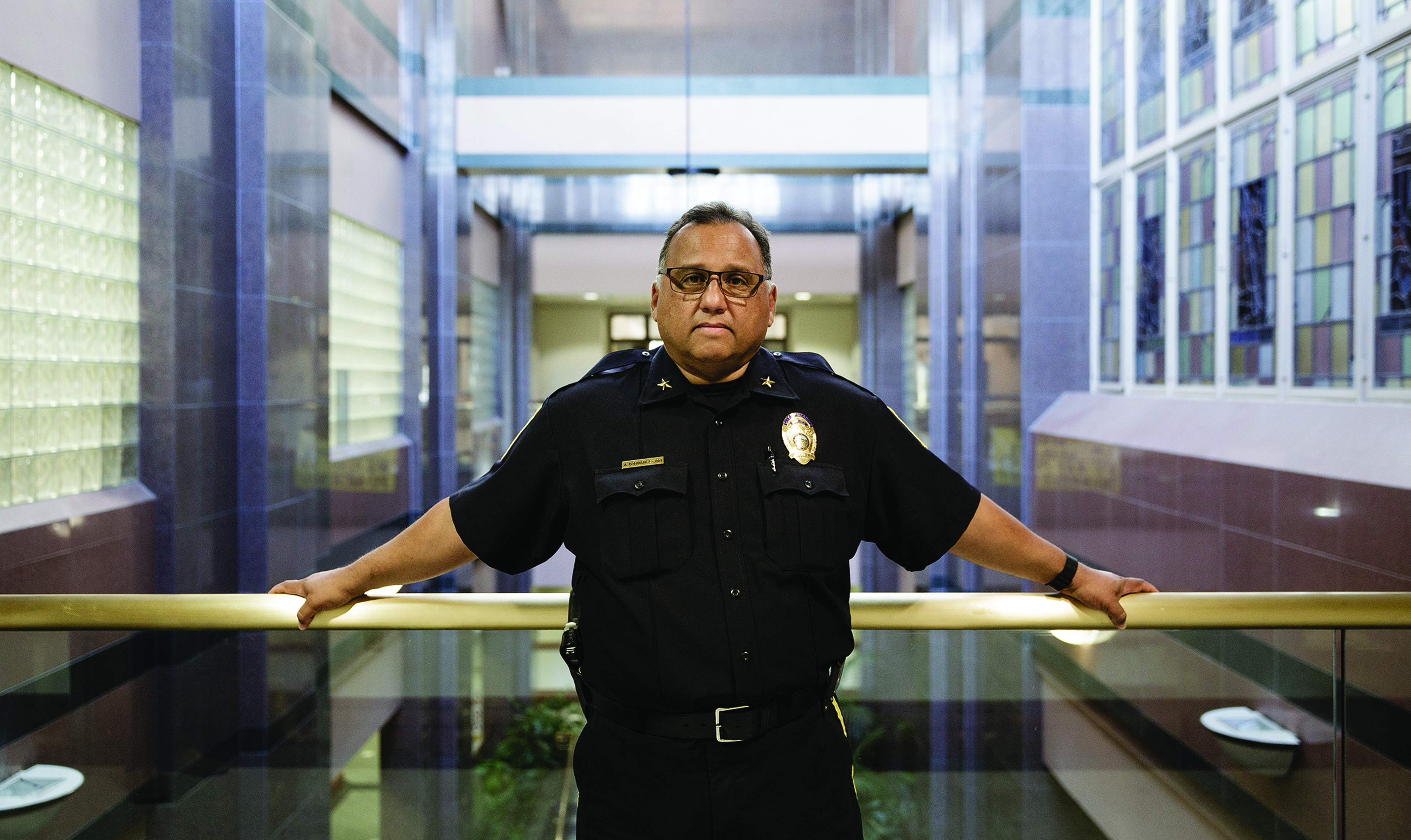 According to the U.S. Bureau of Justice Statistics, there are about 1,117 law enforcement agencies in Pennsylvania, employing more than 27,000 sworn police officers.

And it’s fair to say that graduates of Alvernia’s criminal justice program are well represented among them. In fact, five of those Pennsylvania law enforcement agencies are headed by proud and talented Alvernia graduates.

Alvernia sounded the call early on for law enforcement specialists to be educated and professionally trained. When the late Sister Mary Pacelli Staskiel, a beloved Alvernia icon, was charged with instituting a major in criminal justice, she stepped up to the task.

The degree program was put into place in 1974, a time when there were only a handful of similar programs in the country. Sister Pacelli, as she was affectionately known to colleagues, staff and students, was the only woman (and only nun) in America to run one of those programs.

More than 200 students, nearly all male, joined the program, transforming the small women’s school that had been Alvernia College into a co-ed institution. Those male students became known as “Pacelli’s boys,” and they revered her.

Over the years Alvernia’s criminal justice program has become widely recognized and highly regarded, boasting hundreds of success stories. Five of them are told here.

Andres Dominguez, Jr., who recently returned to his home town to serve as Reading’s police chief, keeps a picture of St. Michael the Archangel, the patron saint of police officers, hanging over the desk in his office in City Hall.

Given to him by the priest of his home church, St. Peter’s in Reading, the picture is a constant reminder of the chief’s commitment to service.

That commitment, he said, was instilled in him at home and in the Catholic schools he attended as a youth, and reinforced by instructors at Alvernia, where Dominguez, 55, earned a criminal justice degree in 1982.

“Alvernia’s Franciscan tradition has always supported its criminal justice program because it’s all tied into service and helping others,” Dominguez said.

One of “Pacelli’s boys,” Dominguez credited the Sister and other Alvernia faculty members for helping him manage a hectic schedule. During college he worked in the same factory where his father was employed.

Full-time factory work while studying was difficult, he said, but he is grateful for the support he received.

“It’s hard to get through college when you’re working full time to pay for it,” the chief said. “But with Sister Pacelli’s help and a lot of understanding from others, I made it through.”

Prior to being named Reading’s police chief, Dominguez was a Pennsylvania State Police officer and completed a 28-year career with the U.S. Secret Service.

It’s all about education for Keith Sadler, the City of Lancaster’s police chief who earned a bachelor’s degree from Alvernia University in 2004 and a master’s in 2006.

“I went back to school late, but once I did, I didn’t want to stop,” said Sadler, 57, who also has completed the course work for a doctorate degree in community leadership and has served as an adjunct professor for Alvernia and Harrisburg Area Community College.

Sadler, who grew up in Philadelphia, was working full time for the Philadelphia Police Department when he decided that he should have a college degree. He earned an associate degree from the Community College of Philadelphia, and was referred by teachers there to Alvernia.

He enrolled at Alvernia’s Philadelphia campus, earning 48 credits in one year while working full time as the chief inspector of the Philadelphia police department’s narcotic unit. For his master’s degree, Sadler commuted from Philadelphia to Alvernia’s main campus.

“It was a hectic time, to be sure,” Sadler said. “But I was determined to earn the degrees, so I just made it work.”

As Lancaster’s top cop for eight years, Sadler has a reputation for fostering community policing and being involved with the community. Within his term as chief he has initiated a citizen police academy, a cadet program in city schools and a Police Athletic League.

Sadler said that Alvernia’s Franciscan philosophy has stayed with him and is instrumental in his work as chief.

“I just like the spirituality and the whole Franciscan philosophy,” he said. “My work is about service, and that’s reflective of what I learned at Alvernia.”

While Sadler loves his job, he realizes that one day, he’ll need to look past police work.

When Sadler retires from police work, he hopes to continue contributing to the field by instructing others in criminal justice.

“Teaching is something that I’d like to pursue,” he said. “That would be a happy place for me.”

Dr. Branville G. Bard, Jr. possesses an impressive list of credentials, including a variety of degrees and certifications.

It’s all about learning with a purpose,” he explained. “I got all of my education between the ages of 32 and 46, and all of that education has directly contributed to the work that I do.”

As chief and director of safety for the Philadelphia Housing Authority’s Police Department, Bard said he has the education and training necessary to run a large, public agency.

“Alvernia just stood out to me,” Bard said. “It offered eight-week classes, and that really allowed me to maximize my time.”

After earning a bachelor’s degree in criminal justice from Alvernia in 2005, Bard earned a master’s degree from St. Joseph University in Philadelphia and a doctorate in public administration from Valdosta State University in Georgia.

Bard said his studies at Alvernia helped him to develop a keen sense of social awareness, which has been invaluable in his work.

“Alvernia really put me on the road to social awareness, and I’m very grateful for that,” Bard said. “I think a sense of that was already in me, but it was really brought out and developed while I was at Alvernia.”

Recently a finalist for the position of chief of police in Memphis, Tennessee, Bard said he enjoys the challenges of public police work. While the job has become increasingly complex and scrutinized, he said he works every day to promote professionalism among police and foster trust between police and the community.

“We are facing some difficult issues, but they’re not insurmountable ones,” Bard said. “We need to keep working on them and make sure that 50 years from now we’re not still talking about the need to make positive change.”

Christopher Neidert is the chief of the police department of Exeter Township in Berks County, but his community involvement extends far past his job.

Neidert serves on the board of the Red Cross of Berks County, is a member of the Berks County Mental Health Advisory Board and was named to the Hamburg Center board of trustees. In addition, he commands the Berks County Emergency Response Team, a highly trained group of law enforcement agents.

“I think it’s really important for police to get involved with their communities,” said Neidert, 52. “It’s all about developing a working knowledge of the community and its needs.”
An Air Force veteran, Neidert earned a degree in business management from Alvernia in 1999, and a Master in Business Administration in 2005. While attending college he worked full time as a patrolman in Exeter Township and with his wife raised a young family.

“I did a mix of traditional and continuing education,” he explained. “Some days I’d change from my uniform, go to class and then go back to work. It was always of matter of just piecing things together.”

Neidert plans to retire from police work in 2018 and start a career in business.

“That’s why I took the business courses at Alvernia,” he said. “I knew I’d be looking for a different career when I retire from police work.”

His business degrees also have helped him with managing his department, which operates on a $5.5 million budget.

“It’s good to have the work experience, but you also need to have the rounding out that a college education gives you,” Neidert said. “I was born and raised in Catholic schools, and I’m grateful for the experience I had at Alvernia. What I learned there has meshed well with my work and community service.”

Jeffrey T. Stone retired from the Reading Police Department as a sergeant in 2015, only to be back on the job a year later as police chief of Heidelberg Township in Berks County.
Stone, 44, earned a degree in criminal justice administration from Alvernia in 2014.

The road to police work was not a straight one for Stone, who enrolled as a student in Penn State University’s marketing program in 1997 after serving for six years in the U.S. Marine Corps. He worked in a marketing job after graduating, but found it wasn’t to his liking.

Instead, he got a job in 2003 with the Reading Police Department, where he stayed for 12 years. While he learned policing on the job, his Alvernia education took his work to a different level, Stone said.

His new job as chief of police blends well with the lesson of service he learned while attending Alvernia, Stone said.

“You get a totally different perspective on serving the public from Alvernia University,” he said. “It’s all based on service, and that really bleeds through into your work.”