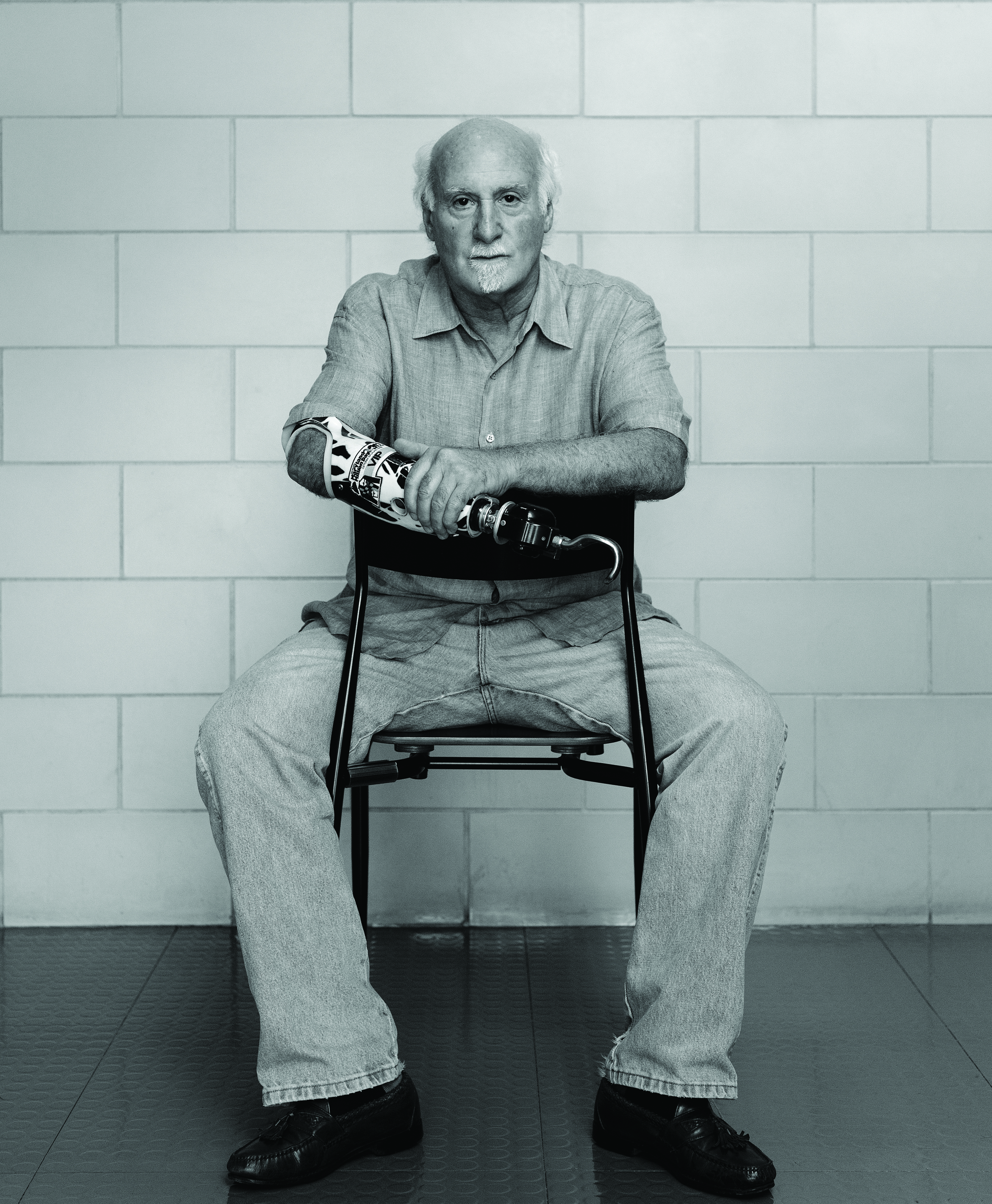 When Time magazine reporter Michael Weisskopf was still in the “land of 10 fingers and 10 toes,” he had no idea what occupational therapists did on a daily basis.

Unfortunately, he was about to find out in the worst way.

On Dec. 10, 2003, the then 58-year-old journalist, embedded with a platoon of the First Armored Division, was riding in an Army Humvee on patrol in Baghdad. A black, oval object landed near his feet. Instinctively, Weisskopf picked it up. It was a blazing hot grenade primed to explode.

“I could feel the flesh of my palm liquefying,” the author of the 2006 book “Blood Brothers: Among the Soldiers of Ward 57” said during a visit to Alvernia in September. Weisskopf hurled the deadly device into the air. Then, he says, everything went black.

By all accounts, his actions saved the lives of the four soldiers and a photojournalist in the Humvee, and made Weisskopf an instant, if reluctant, hero. It also cost him his right hand — the hand he used to take notes for his stories, type on a computer, cut a steak, shake a hand or make PB&J sandwiches for his two children.

Weisskopf would spend a month at Walter Reed Army Medical Center’s famed Ward 57, regaining his life alongside a bevy of wounded warriors. (He also was an outpatient for another five months.) Those experiences formed the basis for his book.

No longer carrying a pen for a living, the now 70-year-old Weisskopf lives in Washington, D.C., and works in real estate. He attributes much of his success to the occupational therapist (OT) who worked with him more than a dozen years ago.

At first, the woman in a white coat who introduced herself as his OT puzzled him. “Was something wrong with my reporting?” Weisskopf said he wondered. The audience of a dozen fifth-year OT students taking the course “Advanced Interventions: Care of the Wounded Warrior” and others laughed.

But Captain Katie became “a lifesaver in the end,” continued Weisskopf, who was wearing a prosthesis with a metal hook. Within days of his injury, he was learning to write with his left hand.

“She was crucial to my re-entry and adjustment,” he said. “I can’t think of a better field to go into. What’s really important is bridging moments of despair with moments of hope. It’s so important. You have the power to do that.”

Occupational therapy is among the hottest professions.

According to the American Occupational Therapy Association in Bethesda, Md., OT jobs are expected to grow 27 percent by 2024, based on projections from the Bureau of Labor Statistics. The outlook for OT assistants is even rosier. Those positions are expected to skyrocket by 40 percent over the same time period.

One reason is the many different specialties available to OTs. They most often work in traditional rehab settings, helping children to older adults regain independence. The growing recognition of autism, as well as more people living with chronic conditions, has increased the need for OTs.

At Alvernia, OT is a popular major. In the 2016-17 academic year, 261 students were studying in the five-year OT program — a 36 percent increase since 2011. An additional 66 students are enrolled in the entry-level OT master’s program.

Cameron wanted her students to hear Weisskopf’s story because, she said, “it’s important for future occupational therapists to see the whole picture. The person had a past before they were injured.”

When it comes to people with amputations, the Iraq war stands out for one reason. At the time of Weisskopf’s injury, 3 percent of the 2,230 wounded in action had lost at least one limb, twice the rate of all previous wars except Vietnam, he wrote in his book. In other words, soldiers who would have died from traumatic injuries were now surviving, due in large part to Kevlar vests and quicker and more advanced treatment on the field.

Certainly, that was the case for those on Ward 57, the so-called Amputee Alley, where almost all these traumatically injured bodies landed. Weisskopf was an anomaly as a civilian. Professional and family connections, he said, got him admitted to the Army’s then-flagship medical center. (The original Walter Reed closed in 2011, and services are now provided at a new Walter Reed facility in Bethesda, Md.)

“The greatest blessing of Walter Reed was being in a community of amputees,” he said.

As Weisskopf talked with OT students, he offered a unique perspective — the journalist outsider as well as the injured blood brother.

Sebastian Collazo, 22, of Hamilton, N.J., said Weisskopf’s talk was “eye-opening” and made him realize that seemingly small details matter. Consider shaking hands. Most of us extend a right hand, but that forces Weisskopf to reach around awkwardly with his left hand. Offering a left hand is more thoughtful, Weisskopf said.

“I have never experienced working with a person who had an amputation,” Collazo said, “but he gave good insight on how to approach and treat them as normally as possible.”

Occupational therapy’s biggest value, perhaps, is its pragmatic approach, Weisskopf said. Adaptive equipment and tricks abound to help people with amputations do everyday tasks. Elastic shoelaces help the one-armed tie their shoes. Teeth aid in hanging up a jacket. But some things can prove impossible. Weisskopf’s wife still has to cut up his steak.

“OT gave you hope,” he said, “because they came up with effective strategies.”

Besides his traumatic injury, Weisskopf also struggled with the label of hero. “I had always wanted to be a hero, the guy who defended the weak or drove in the game-winning run,” he wrote in “Blood Brothers.” But Weisskopf was ambivalent about his actions in Iraq. “I continued to be haunted by the question of intent. Did I act out of pure reflex or purposely grab the grenade to protect everyone?”

Unlike many of the soldiers, he found no solace in sacrifice. Weisskopf said he questioned the purpose of the war when Iraq’s weapons of mass destruction failed to materialize. He wasn’t fighting for a patriotic cause. But in the end, Weisskopf said he came to realize that the reason for his actions mattered less than the result: Lives were saved.

“It’s a rare privilege to point to people that you saved, whatever motivated me to do that,” he said.

For U.S. Navy veteran and Alvernia freshman Matthew James Walsh, 26, of Reading, Weisskopf is without a doubt a hero, but for another reason.

“I find the true measure of his courage in his ability to continue on in spite of losing his hand,” said Walsh, who is studying business management after serving two tours of duty in Asia. “His actions in the Humvee were laudable. But his courage to persevere in his rehabilitation and to give voice to the unheard are what earned him my respect. The latter actions are those that I would deem heroic.”

Lini S. Kadaba, a journalist based in Newtown Square, Pa., is a frequent contributor to Alvernia Magazine.