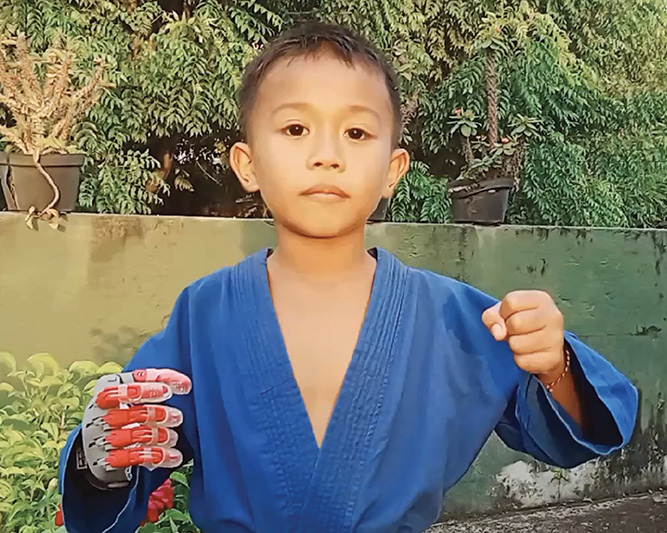 With the help of an online group and 3-D printing, the team changed the life of an 8-year-old child

At the beginning of the fall 2021 semester, little did occupational therapy students Kristen Culligan, Kaitlin Faulcon, Phyllis Arthur-Williams, Pamela Loaiza, and Hannah Bailey know that their outlook on the occupational therapy profession would change because of one little boy in Indonesia. The project began when Dr. Gregory Chown introduced his OT427: Adapting and Grading class to an online organization called E-Nable, an open platform comprised of volunteers all over the world seeking to create prosthetics for those in need.

Having initially learned about the platform and its volunteers working with 3-D printing from the E-Nable chapter at Bucknell University four years ago, Chown became fascinated with how it could benefit clients in his own area of specialty: hand injuries and hand trauma. Using E-Nable, Chown was able to explore the world with his students using a virtual map to find clients in need of prosthetics or adaptive devices. “During the first few years as I learned the ropes of 3-D printing, I had students use the website to download templates and create simple adaptive devices as practice. However, this year every single group made fingers or hands and sent them to real clients,” Chown explained. “What’s amazing about E-Nable is that it not only allows us to find people in need of prosthetics on a global scale, but it also facilitates culture exchange. Our students are learning about other cultures as they work with their clients.”

This culture exchange is just one of several interesting aspects that Culligan, Faulcon, Arthur-Williams, Loaiza and Bailey experienced as they crafted a full prosthetic hand for Anan, an 8-year-old boy in Indonesia. Using Loaiza’s hand as a model to begin sizing the prosthetic, the group worked together throughout every step of the process to ensure that they could build a prosthetic meant to last. “The biggest challenge we had in the beginning was knowing that he’s a growing boy who hadn’t hit puberty yet. We wanted to make him something that would last a few years so that he could get the best use of it. You can always add more padding if the prosthetic is too big, but once it’s too small it’s of no use anymore,” explained Faulcon. Bailey continued, “We did have to reprint some of our pieces so that we could accommodate for his growth, but we were happy to take the time and get it done if it meant we could send him a hand he could have for a while.”

Taking about 20 hours to print and another 10 hours to assemble, the group knew that building the hand was no small task. They worked tirelessly throughout the semester to ensure that they could ship the hand to Anan before the hectic holiday season. In early January, Culligan received an email from Anan’s dad with a video and photos of him using the hand to hold a bowl and eat. “Seeing those pictures was really fulfilling for me. When we first started this class, we were learning about amputees. You hear about it and read about it, and while it’s interesting to hear those stories, everything changes when you’re actually working with those people. You never think about how often you use your hand for everyday occupations, so having Anan be able to go to school and think ‘oh, I can actually do this now’ is inspiring,” Loaiza explained. Arthur-Williams added, “To be able to give Anan something that allows him to do functional activities like other little boys his age feels great. I think this project as a whole really shows how our profession is really about service, and how if we put our minds together we can accomplish anything.”

Chown’s next goal is to have Alvernia become a recognized chapter of E-Nable so that our students can continue helping people on both a local and global scale. “We have incredible technology here at Alvernia, and our 3-D printers are making a significant impact in people’s lives. We’re able to help increase independence in different occupations such as work, play and leisure,” Chown said. “I am super proud of our students because they’re changing someone’s life. They persevered, they were motivated and they never gave up.”

Culligan echoed Chown as she reflected one final time on the group project: “Before making the hand, I was interested in hand therapy, but I think this project solidified that direction for me. It was such a cool experience and I enjoyed every part of it. I feel like a little piece of all of us are there with him in his hand. It makes me more excited to finally become a practicing OT and it gave us a little taste of the impacts we can have. The smallest things can make the biggest difference for someone.”