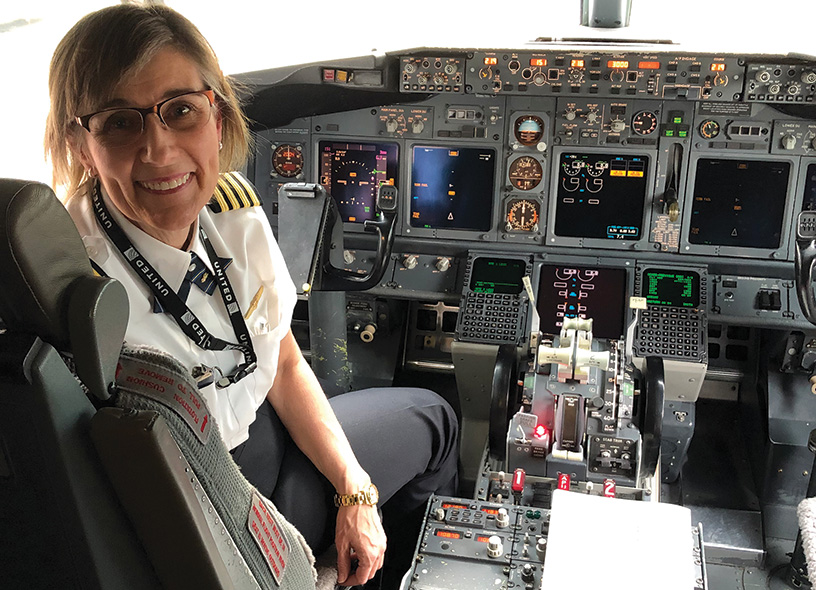 Evelyne Tinkl, MBA ’18, can’t recall a time when she wasn’t interested in aviation. When her grandmother took her on walks as a little girl, she would look up at the sky, captivated by the sight of an airplane passing overhead.

“There’s just been one thing I knew I was going to do,” the Austrian native said. “You hear that a lot among pilots. There are very few accidental pilots.”

Tinkl’s father was a diplomat, so she experienced a fair share of air travel in her youth.

“When we were living in [West] Africa, we were flying over from Geneva or Zurich into the Ivory Coast and I remember sitting by the window and looking out at the Sahara Desert,” she said. “It was hours and hours of nothing but sand. It absolutely blew my mind. And it still does now.”

Tinkl attended school in West Africa. She spoke German at home and French in school, where she also learned English. For a high school graduation gift, her parents surprised her with a Glider Rating Certificate, which allowed her to fly glider planes solo and spend four weeks learning about aviation.

“It was a test to see if I was really serious about flying,” she said. “Not only did I like it, I loved it more than I even thought I would.”

Training for a career in aviation is expensive, so Tinkl began doing odd jobs, giving French lessons and working at the Vienna International Fair. It was there that she filled out a sweepstakes raffle to win a car — and won.

“There’s just been one thing I knew I was going to do. You hear that a lot among pilots. There are very few accidental pilots.”

“The universe gave me a big break,” said Tinkl, adding that she sold the car to pay for flight training in the United States. She eventually became a flight instructor and a trained aircraft mechanic and continued earning the many certifications necessary to become a pilot.

Early in her career, Tinkl worked for a few smaller commuter airlines, then set her sights on landing a post with a major airline. She was already a captain, had a pilot’s certificate and had logged the requisite flying time. However, she needed a college degree. So, she took classes in Virginia, where she was living and working at the time, and ultimately graduated with a bachelor’s degree from Embry-Riddle Aeronautical University.

Tinkl also joined Women in Aviation International and applied for a scholarship to complete the training for an Airbus Type Rating Certificate. The universe gave her another big break when she won — the scholarship was worth around $30,000. At the awards ceremony, the speaker who introduced her noted that she had accrued 10,000 hours of flying time by then, an impressive number that caught the attention of a table of United Airlines representatives sitting near the stage.

“That was in March, I interviewed with United in June, and I was hired in August,” Tinkl said. “That was 1998 and I’ve been with United ever since,” except for a short stint at JetBlue when she was furloughed after 9/11.

In 2016, Tinkl decided to continue her education in business and economics. She chose the MBA program at Alvernia because it is accredited and because she could complete it online around her work schedule.

“It turned out to be a lovely experience,” said Tinkl, who lives four miles away from the university in Mohnton.

Late last year, Tinkl hit 25,000 hours of flying time. In her 35-year career, she has flown planes of all shapes and sizes, from gliders to big fleet aircraft. She has circumnavigated the globe and saw the sun rise over the Amazon and the North Pole. She’s also seen the Northern Lights from above.

“The Aurora at altitude is just stunning,” she said. “They’re beautiful on the ground, but in the air, it’s just breathtaking.”

Seeing the world is, of course, one of the greatest perks of her job and Tinkl has taken full advantage of it. One of the most memorable places she visited is the Jing’ An temple in Shanghai with its sunlit glass buildings, courtyard bells and wafting aroma of incense.

“Every time I’m someplace, I try to do something I haven’t done before,” she said. “I’ve had lots of little adventures.”


When Tinkl entered her field, only about 3% of all commercial pilots were women. Though that figure has increased, it remains low at 6%. “It’s been really slow going,” she said. “I think a lot of it has to do with just a lack of support and opportunity for girls.”

Understanding firsthand how such support can make an aviation career possible, Tinkl and a colleague founded the Keep Flying Scholarship for Women in Aviation after 9/11. To date, it’s awarded more than $100,000 to intermediate-level aspiring pilots.

Tinkl said the scholarship, for which she serves as CEO and COO, is one of her proudest accomplishments.

“You give someone an opportunity, you give them some support and you give them a reason to believe in their capabilities,” she said. “We can back them up and empower them.”