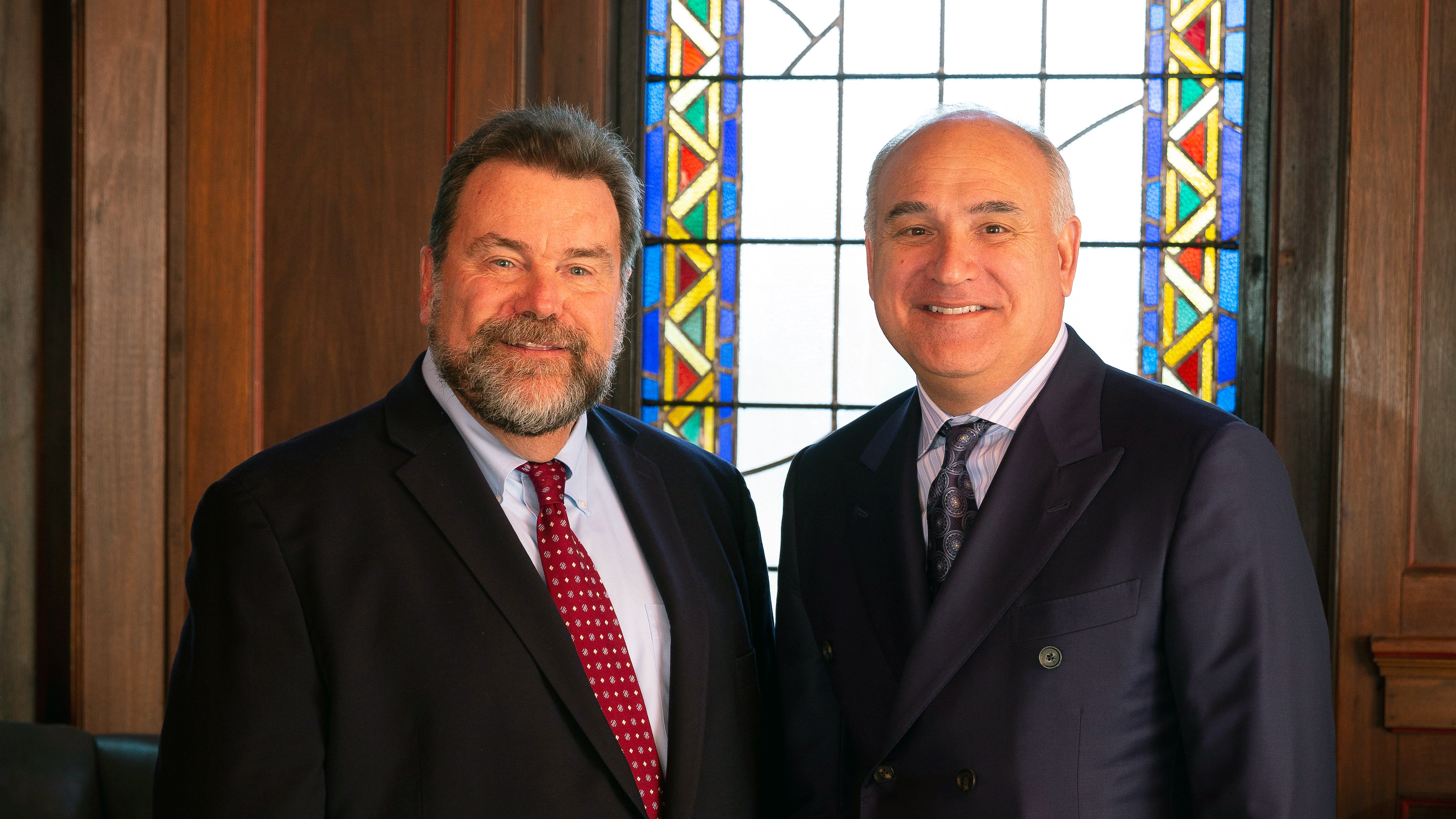 As Tom Flynn steps down after 14 years leading Alvernia, the university welcomes John Loyack as its seventh president.

It’s no secret to those who know him well that Alvernia’s sixth president is a big fan of classic rock. The Who, the Rolling Stones, the Byrds—these iconic bands that helped shape the music landscape more than half a century ago remain fixtures on the playlist that runs through Tom Flynn’s head.

And while Flynn may have been president of Alvernia for only a fraction of the time that radios (and, now, streaming services) have been playing the tunes of these immortals, his influence—on the university, in his case, not the music world— has been no less profound. During his 14 years as president Flynn helped transform what had been a modest, local, mostly commuter college into a robust and thriving regional university that’s established itself as an anchor institution in Berks County. Under Flynn’s leadership, Alvernia has launched new programs that expand and reinforce the university’s mission and Franciscan values, such as the Reading Collegiate Scholars Program. The O’Pake Institute for Ethics, Leadership, and Public Service and the Holleran Center for Community and Global Engagement have had major impacts on and beyond the campus. Alvernia exceeded its target goal in completing its first-ever comprehensive capital campaign, has enjoyed 15 straight years of budget surpluses and has seen enrollment grow to its highest level ever. In fall 2018 the university welcomed the largest, most diverse and best prepared first-year class in history.

These would be noteworthy accomplishments for any university, but they are especially so for one in the demographically challenged northeastern part of the country, where many colleges struggle to hit enrollment targets and keep budgets in the black. “What the university has been able to accomplish during very turbulent times, that’s been both the biggest challenge and our greatest success,” Flynn said. “What a long, productive trip it’s been.”

Tom Flynn’s last day as president is June 30, 2019. The consensus is that he will be a tough act to follow. Which raises the question: just how do you follow him? 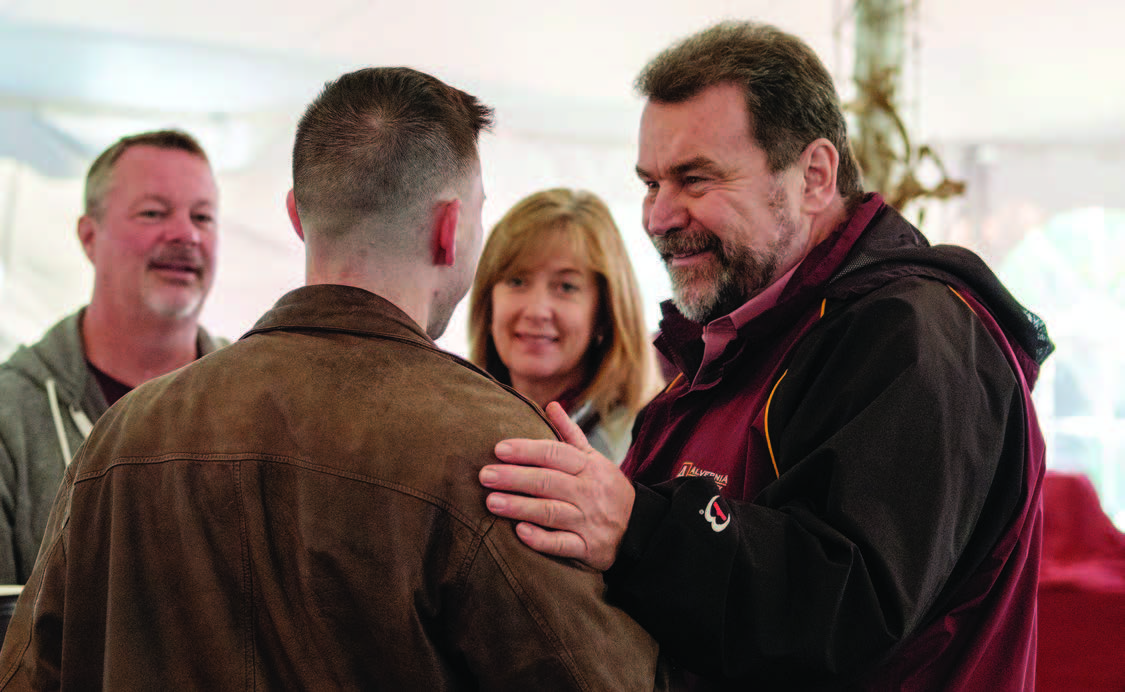 That question became front-burner for the university when Flynn announced his retirement last year, and drove the work of a board-appointed presidential search committee—a diverse team made up of board members, faculty, administrators, students, and members of the Franciscan community aided by the professional search firm RH Perry & Associates. The bar was set high—the right person to build on a decade and a half’s worth of momentum would bring an entrepreneurial vision and would provide continued strong leadership while taking Alvernia to the next level of accomplishment.

Thousands of feelers went out to college leaders around the country, resulting in nearly a hundred applications for the position. Nine semifinalists were interviewed over two days in a Philadelphia hotel, before three finalists were invited to campus. The decision came in December: John Loyack, executive vice president for business and administration at King’s College, would be Alvernia’s next president.

“It was immediately evident to the board that John Loyack was the right choice,” said trustee chair Michael Fromm. “He has a compelling personality, unique insights into what Alvernia needs to stay strong and viable, and tremendous respect for our historical accomplishments and Franciscan values.”

Loyack brings with him an intriguing skill set formed by substantial experience in both higher education and the corporate world. He returned to King’s College, his undergraduate alma mater, six years ago, after a successful career in business, most recently as president and CEO of Optim Energy, a Texas-based operator of power plants. The board saw this blend of talents as an asset.

“He impressed us as being an inspired communicator with a data-driven, strategic approach,” said trustee Steve Najarian, who along with Ellen Huyett, co-chaired the search committee. “We felt John had the ability to see around the corner and see outside the box in this complex and rapidly changing world of higher education.” 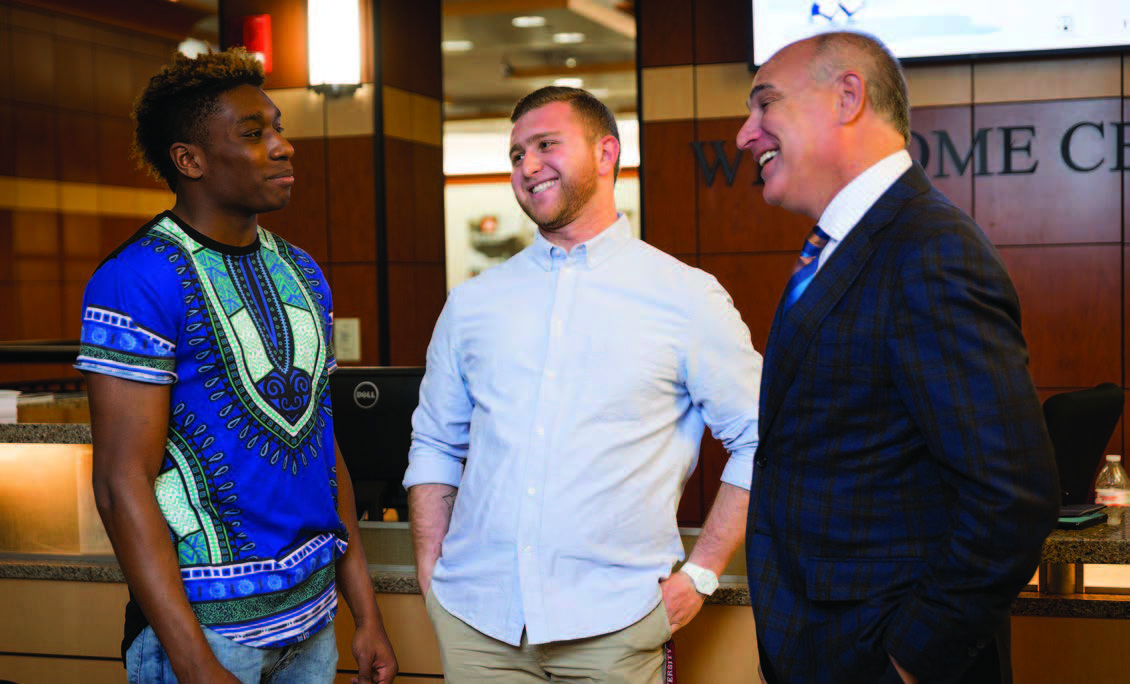 Several factors have helped make the transition from Tom Flynn to John Loyack effective. One is timing. Because the board announced his appointment in December, Loyack has had half a year to get to know the university and learn from its president. Another is geography. King’s College, in Wilkes-Barre, is about an hour-and- 45-minute drive from Reading. This has made it possible for Loyack to make several visits to campus, typically for a week at a time. “What this has done is allow me to get a really deeper understanding of the institution—the people, the culture, the community—than one would expect from a presidential transition,” Loyack said. “It’s been a wonderful experience and has given me a terrific perspective.”

The proximity of the two campuses made it possible for people from Alvernia to visit King’s for a first-hand look at some of the programs Loyack has helped put in place there. “This cross-fertilization is completely unique,” he said.

On July 1, the same day John Loyack begins his presidency, Tom Flynn will board a plane to begin a two-week vacation in Scotland and Ireland. He and his wife Helen plan to stay in the Reading area, where he will serve on some local boards including as vice chair with Caron Treatment Centers. He will also be a senior fellow at two national higher education associations, helping prepare future leaders and supporting the work of board chairs and presidents. Leaving Alvernia is bittersweet, but he doesn’t doubt it’s the right thing to do. “My goal all along was to have mixed emotions, but no second thoughts,” he said. “This is the right time for both Alvernia and the Flynns.”

“Tom is handing Alvernia off in wonderful condition,” Loyack said. “I couldn’t be more excited to start it off at this point.”

“Between our dreams and actions lies this world,” sings Bruce Springsteen, another of those rock-music immortals. Alvernia is fortunate to have been led for the past 14 years by a man who has helped define its world by narrowing the gap between its dreams and its actions. And it’s fortunate now to be bringing on board a new president with the personal traits and skill set to continue to bring ambitious aspirations to life.

“We more than got lucky having Tom for all this time,” said board member Ellen Huyett. “But change is good. New people bring new ideas and different energy.”