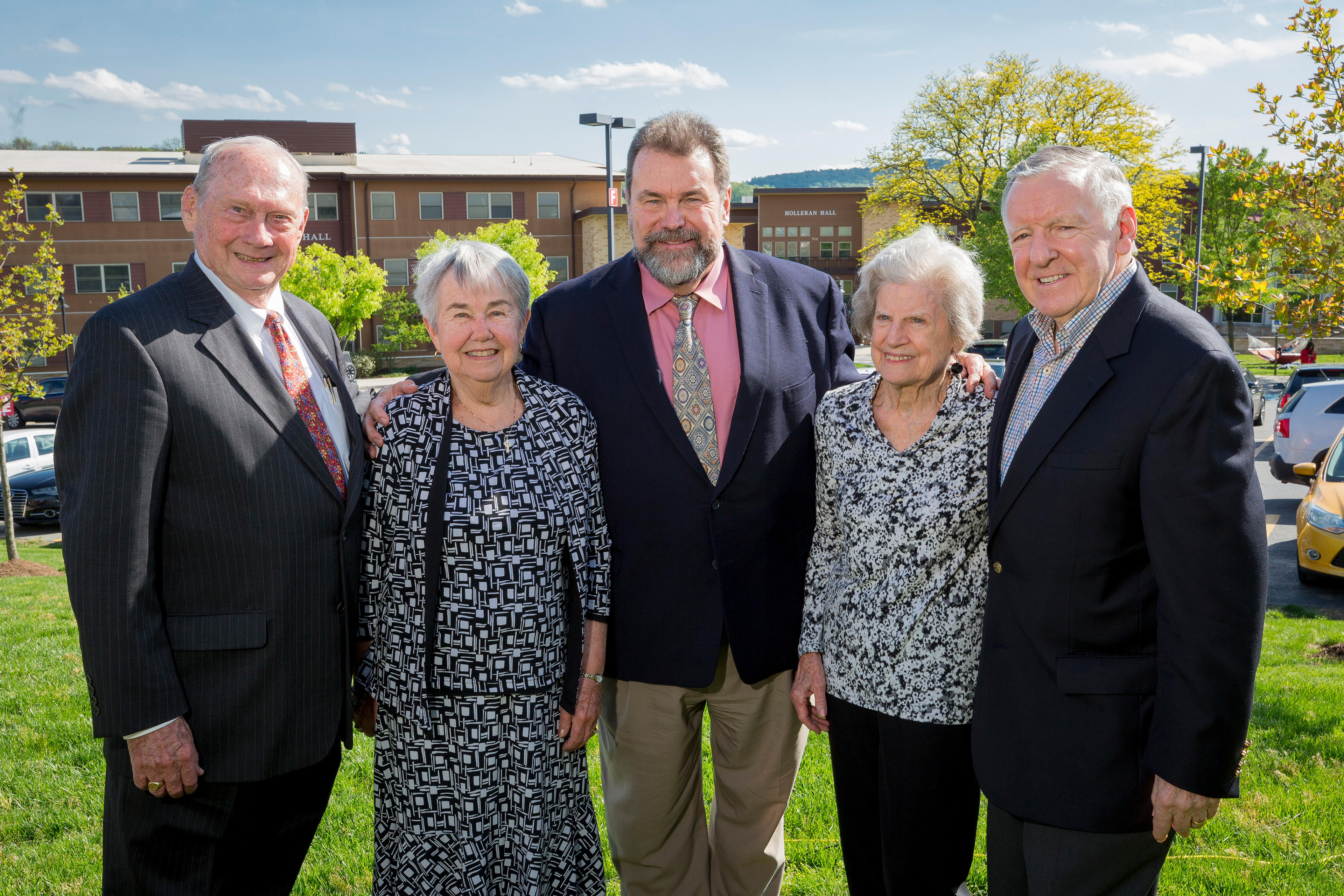 “The Hollerans and the Ehlermans are among Alvernia’s most passionate advocates,” said Alvernia University President Thomas F. Flynn. “In addition to their generous support and leadership, their leadership as distinguished trustees and their public advocacy of Alvernia has helped raise the university’s stature in Reading and Berks County. Our current trustees and all at Alvernia are pleased and proud that current and future students will forever know Judy and Mike Ehlerman and Carolyn and Jerry Holleran as lay founders of Alvernia.”

The naming of the two buildings marks the conclusion of residence halls naming at Alvernia University. The buildings are part of Alvernia’s Founders Village, a series of residence halls constructed between 2009 and 2012 as part of the campus master plan to expand residential capacity for 1,000 students. The first two buildings were named in 2011 for Alvernia Foundresses Sr. Zygmunta and Sr. Pacelli.

“Alvernia is often noted for being a young university, dating back only to 1958, and yet in this relatively short time span we have built a rich and impressive legacy guided by the vision and fueled by the support of iconic religious and lay leaders,” said Alvernia University board of trustees chairman and CEO of Fromm Electric Supply, Michael Fromm. “Sister Zygmunta and Sister Pacelli are rightfully honored on two of the Founder’s Village residence halls, and today we add two more cherished names to the other halls today.”

The Hollerans leadership helped established Alvernia’s Holleran Center for Community and Global Engagement which integrates the university’s curriculum and co-curricular activities with the external community. Carolyn Holleran served on the board of trustees at Alvernia University from 1992 to 2000 while Jerry served from 2000 to 2008.

“Carolyn and I feel honored and privileged to have our name directly associated with a resident dorm at Alvernia University, said Jerry Holleran. “This is especially true when you consider the many prestigious names on earlier dorm buildings. It is truly a Franciscan neighborhood in which I’m sure we’ll feel quite comfortable.”

Mike Ehlerman joined the Alvernia board of trustees in 1993 and served until 2002, including time as chairman. The Ehlermans have established various scholarships for Alvernia students. In addition to his work with Alvernia, Mike Ehlerman is the retired president of Yuasa Battery Inc., the chairman of the Berks County Convention Center Authority and has served on the boards of various organizations around Berks County.

"I owe a lot to Catholic education, and I’ve always had a soft spot for Alvernia,” said Mike Ehlerman. “The Catholic Franciscan identity and Bernardine Sisters always spoke to Judy and I. I am so proud of what Alvernia has become, and I am happy to be a small part of that story."