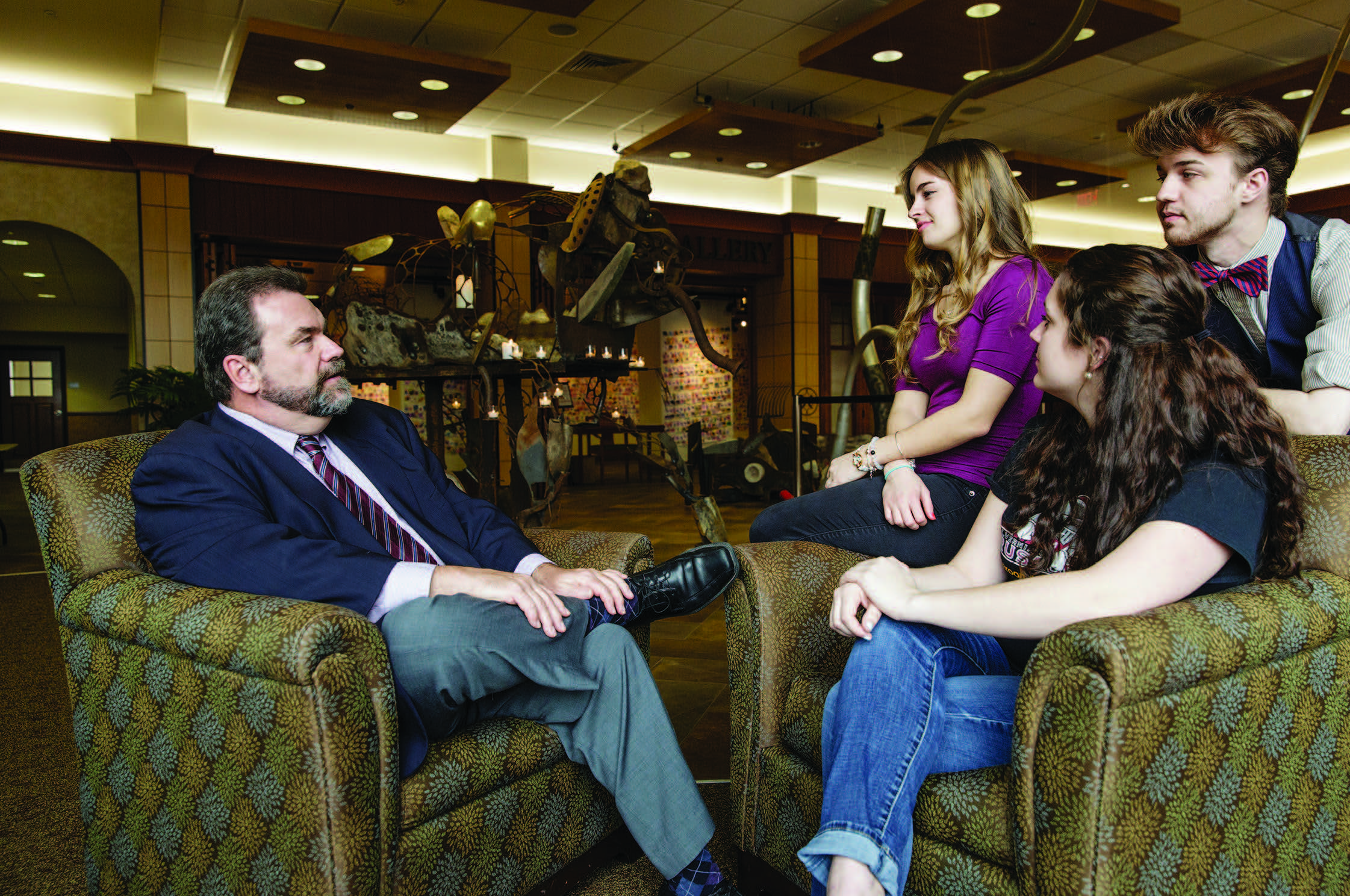 When Alvernia University President Tom Flynn steps down in June, he will leave behind a plethora of significant accomplishments, including guiding the school from a small, local college to a regional university, establishing two endowed centers and most recently, adopting football and the Golden Wolves mascot.

But for many students and recent graduates, perhaps this transformational leader’s most enduring legacy is found in the many small ways he has managed to engage the community.

Often, Flynn’s success is as simple as saying hello to students by name. He also is known for the dinners he hosts at his home for student leaders. And for the time he makes to chat with visiting alums. And for the handwritten notes he sends to recognize life milestones.

“Those little interactions are really important,” said Kaitlin Didinger ’20, a 21-year-old nursing major from Boyertown, Pennsylvania. “It makes Alvernia feel more like home, and it makes it an easy place to call home.

I think it’s a big part of his legacy.”

Didinger, who is vice president of the Student Government Association (SGA) at Alvernia, remembers well one of her first encounters with Flynn. She was an Orientation Weekend Leader (OWL) during her sophomore year, and as she directed students to activities, she walked by the President’s Office in Francis Hall. He stopped to ask about Didinger’s group and how it was going.

She still is awed that “the president knows me by name,” she said. “That’s a big deal. I think he just genuinely cares how students are doing.”

The first time Chloe Gletow ’20 met Flynn, she was nervous. After all, she was a freshman attending a luncheon for scholarship recipients, and he was president of the university.

Turns out, she had no reason for the jitters.

“He’s so friendly,” said Gletow, 21, the president of SGA and an occupational therapy major from Flemington, New Jersey. “You talk to him, you automatically connect. When he is talking to you, he focuses on you, what you’re up to.”

She has engaged with him at Pizza with the President sessions held in the cafeteria, Alternative Breaks Dinner and university committees.

In her leadership role, Gletow has attended board of trustee meetings as a student representative.

“President Flynn has asked for my opinion or what SGA is doing,” she said, tangible proof that he “cares about students and student life.”

What could the Baby Boomer Flynn have in common with Millenial alumni? Similar music tastes in this case, it turns out.

Mark “Louie” Lacek ’15, a criminal justice major, also sang in an a capella group he helped start while at Alvernia.

“Dr. and Mrs. Flynn love music,” said Lacek, 25, a Reading police officer who lives in Berks County. “They invited us to a couple of events. It gave us support.”

At one concert, the group sang an arrangement of “Oh Danny Boy,” that classic Irish tune. Flynn, of course, has Irish roots.

“He is fond of Irish folk music, which I am also quite a fan of,” Lacek said. “Here I am, 18 years old, and I am talking to him about similar tastes in music. It just added to the personability of him. It wasn’t that we had a conversation once and he knew my name. He knew me. You know with him that he saw you.”

Erin Sheehan ’15 will never forget the SGA recognition program her senior year. As someone who was super active in the organization, rising to president, she got her share of kudos. But what was truly memorable happened afterward.

Flynn pulled her parents aside, she said. “He had a great conversation about me with them,” said Sheehan, 25, of Christiansburg, Virginia, who studied healthcare science at Alvernia and now works as an assistant director of admissions at Radford University in Virginia.

He reassured them over that common parental concern: how a child will fare in the real world, Sheehan said.

“It made them feel a lot better,” she said.

Since graduation, Sheehan has maintained her connection to Alvernia, in large part because of Flynn. While traveling for work in the Reading area, she stopped by campus.

“With a day’s notice, he was able to get me in to chat for a few moments,” she said. “I have a place to go back to for sure.”

As a double major in political science and history at Alvernia, Emily Berret ’11 observed up close Flynn’s leadership style—one built on personal connections.

“That’s the leadership style I want to follow,” said the Washington, D.C., resident and director of operations for Minority Leader Nancy Pelosi.

“Everyone knows who Dr. Flynn is, and Dr. Flynn knows who everyone is,” said Berret, 29, the daughter of Beth Berret, an associate professor of business at the university. “That’s what really creates that sense of identity at Alvernia. When you come to Alvernia, you’re not just a number. You’re a face.

“I watch politicians all the time,” she continued. “I really feel like he has that political knack, that ability to connect with everyone, no matter your history or background.”

Berret followed that advice, taking advantage of the Washington Center Program and landing an internship at the Obama White House. She returns regularly to campus, speaking to students and serving on the Presidential Advisory Committee.

“Dr. Flynn fosters a sense of community,” Berret said. “It’s part of the reason you want to come back and help out.”

Alex Roché ’15 credits his relationship with Flynn for his choice of career in sustainable and affordable food access.

“He was guiding us to be better learners, guiding us to be better people, and like he says, to do well and do good,” said the 25-year-old who is a project associate with the Food Trust of Philadelphia and works and lives in Reading. Before that, he worked with Alvernia’s Holleran Center for Community and Global Engagement through Americorps VISTA.

Like so many, Flynn knew Roché’s name after meeting him freshman year. But the biochemistry and forensics major does not consider that first interaction the most significant.

“It’s the second,” he said, “because he remembers everything you said in the first interaction. He remembers your name. Then he asks you how your Chemistry 101 course is going, and then about choir and band. He shows genuine concern for you.

Even more important, Roché adds, “the fact he cares about me, makes me care about others. Alvernia is there to build ethical leaders with moral courage.”

When Melissa Masone Ulmer ’09 got married, Flynn sent a card of congratulations, one she keeps to this day, and an Alvernia baseball hat for her husband, noting he might “need some gear.” When her son was born earlier in 2018, Flynn sent an Alvernia onesie for him.

“He’s seen me grow up,” said Ulmer, 31, assistant director of marketing and student programs at Rowan University who lives in Pitman, New Jersey, and double majored in political science and communications in college. “He has this really genuine way of making each of his interactions seem unique and special. He gets to know you as a person.”

As a student who wrote for The Alvernian, the college’s newspaper, she interviewed Flynn as part of the inauguration coverage.

“I got to spend some good time with him,” she said. “He has a welcoming, warm demeanor. I find him so endearing.”

After graduation, Ulmer moved to the Washington, D.C., area to pursue a master’s in strategic communication at George Mason University, and helped found Alvernia’s D.C. alumni chapter. Flynn often had dinner with alums whenever he visited the area—visits that were like reconnecting with a “long lost friend,” she said.

That type of engagement, she said, keeps alumni tied to Alvernia. “For a lot of us young alumni, the institution has gone through so many changes and growth,” said Ulmer, who’s involved with the Alumni Association. “But when you have something that stays consistent, it allows you to hold on to that little piece of comfort.

“And for a lot of people,” Ulmer said, “Dr. Flynn has been that little piece of comfort.”