Developing the board as a national model of governance 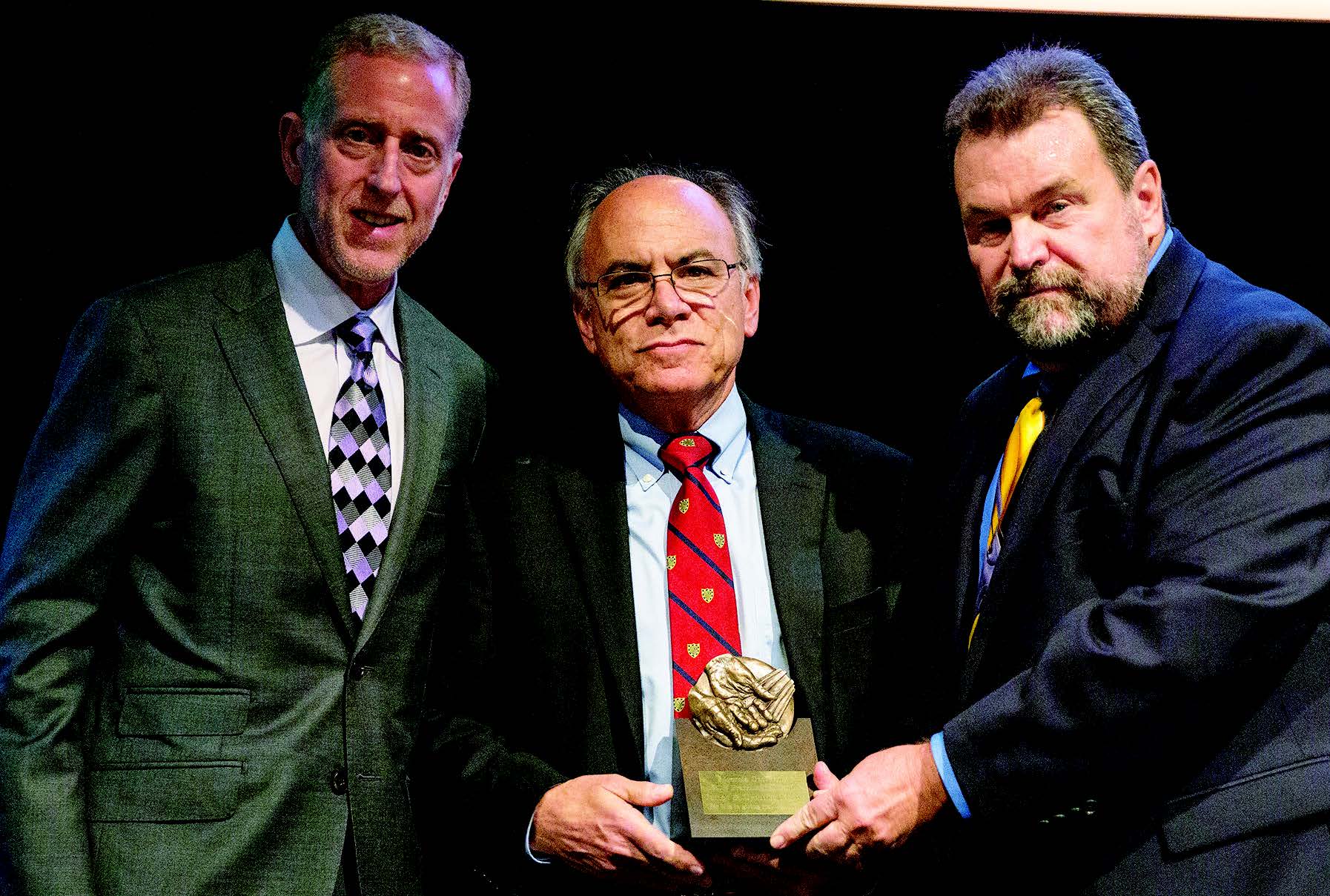 Current Board Chairman Michael Fromm along with Flynn presents Boscov with the 2018 Franciscan Award.

On June 5, 2005, Tom Flynn arrived on the campus of Alvernia College to succeed Larry Mazzeno as president of this rather small and relatively unknown Franciscan institution. Fourteen years later, the change is astounding. Not only is Alvernia now a distinctive comprehensive university, but also nationally known for its board development. From the beginning, I believe Tom had a vision of where he wanted to take Alvernia. Most importantly, Tom had the people skills and management style to get there and take everyone with him.

He was the new president; I was the new chairman of the board of trustees. He was incredibly well prepared for the job. This was his second presidency having served as provost and then as president of Millikin University in Illinois for nine years. Most recently, he had served as senior advisor for the Council of Independent Colleges where he worked with nearly 100 presidents and trustees on matters of governance and institutional strategy. By comparison, I’m just glad I was smart enough to smile and look like I knew what I was doing.

There were two elements of Tom’s management style that stand out and, in my mind, enabled so much of the progress and change that’s happened during his tenure. He understood the importance of building consensus, and he had the ability to address each constituency in a way that mattered to them.

President Flynn is widely recognized for his knowledge of higher education governance and his passion for ensuring that the board governance of Alvernia University reflects best practice. Working closely with his board chairs, he has made sure that both the art and science of governance inform the board’s work, with the result that Alvernia University is among the best governed private institutions in the country.

I join the Alvernia community in bidding Tom Flynn a fond farewell after an exceptionally productive 14-year term as president. From my governance perspective, I especially commend Tom— together with excellent board chairs and smart, dedicated board members—on developing policy and practice that has ensured institutional decision-making of the most strategic, effective and consequential kind. AGB has recently risked identifying the essential components of good governance: a judicious and intentional blending of right people, right focus and right relationship knit together by purposeful discernment. Though this level of performance is sought by many boards, it is attained by only a few … a few among which I would proudly include Tom Flynn, Jim Boscov and the Alvernia board. Truly, they are to be counted as “exemplars of good governance.”

In today’s volatile and rapidly changing higher education environment, the role of the university governing board has become critical to the future of the institution. The Alvernia board, as I know from personal experience, serves as a model. The appropriate board and committee structures are in place. But more important, there is a vital board culture of trust, transparency, inclusiveness, engagement and shared decision making. It is indicative of thoughtful presidential and board leadership, and no doubt reflective as well of Alvernia values and culture.

When Tom arrived on campus, I’m sure he had a good idea of what he wanted to accomplish in a variety of areas. Like any smart leader entering an organization, he spent much of his early time listening—understanding who everyone was, what they wanted and where they thought Alvernia should be heading. Rather than unilaterally announce his plans and agendas, he recognized the need to bring everyone along with a unified vision. To do that, he invited professionals in a few specific areas of expertise to visit the campus, meet with all of the interested parties and deliver a recommendation to the board of trustees or other members of the college family. We engaged well-respected consultants in enrollment management, development and campus master planning. While Tom may have known from the beginning what needed to be done, bringing in recognized experts put the emphasis on what needed to be done and not on what the new president wanted. As a result, plans were made, the work was done and everyone supported the changes.

Perhaps the best example of bringing everyone together was the strategic planning process that Tom launched in his second year at Alvernia. Rather than head the process himself, he appointed two well-respected members of the campus community to lead the effort. In the process they met with each and every segment of the college community—students, staff, faculty, trustees, friends of the college and more. Everyone had a vested interest in supporting and executing the final result. Everyone was a winner, but Alvernia benefited the most.

Once plans for the future were established, and with everyone on board, Tom recognized that it was time to launch a major capital campaign. With professional and collaborative processes in place, the campaign succeeded in raising over $32 million, a record amount and a resounding success.

As the leader of a very diverse community, Tom recognized that not every element of the community has the same needs or interests. Some leaders broadcast their same unaltered message regardless of the audience they’re addressing because that’s their message. Tom has the special gift of delivering the right message to each particular audience; he tells them what’s important to them. Speaking specifically and with relevance to an audience also invites dialogue, and two-way communication is essential in every community especially one with such vastly different constituencies.

Tom tells me I was a leader during the time I served as board chairman. I believe we accomplished a lot in these first few years of his presidency, but my recollection is that I held onto his coat tails to keep from being left behind. But I also know that I benefitted from exposure to his leadership style which has helped me in my role in business today.