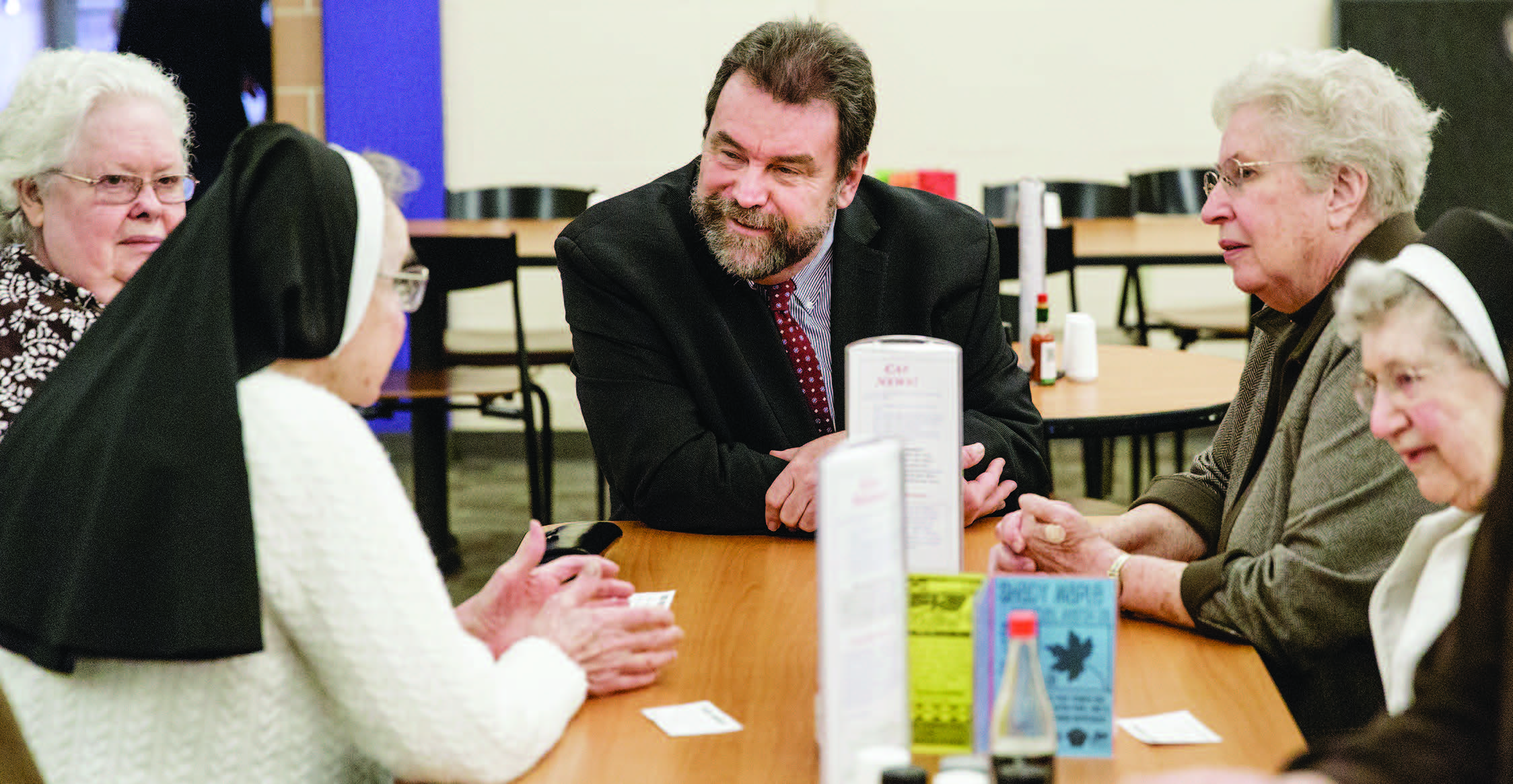 It’s not unusual for Alvernia University President Tom Flynn to attend a service in the Motherhouse Chapel or to walk over to the McGlinn Conference & Spirituality Center for a meeting with some of the Bernardine Sisters. When the sisters celebrated the start of their 125th anniversary year in October, Flynn sent a bouquet of roses and a handwritten card congratulating them.

That accessibility, thoughtfulness and a deep sense of friendship between the president and the sisters are just some of the qualities that will be dearly missed when Flynn steps down in June after 14 years of leadership that transformed the university.

“Among his gifts is the gift of inclusion,” said Sister Marilisa da Silva, congregational minister of the Bernardine Sisters who also serves on the university board of trustees. “He has the ability to bring everyone together and he builds community.”

She noted that Flynn has greatly increased Alvernia’s visibility and reputation nationally, while maintaining an active role in the greater Berks County community. He has been instrumental in implementing partnerships and relationships that bring others onto Alvernia’s campus, while also increasing the sending of students, faculty and staff into the community and the world.

“He’s very faithful to the teachings of the Church,” da Silva said. “He’s expanded international mission by students and faculty members by supporting alternative breaks, while also focusing on mission that occurs right here in Reading.”

While Flynn’s leadership since 2005 is undisputed, he has not served Alvernia in a vacuum. Based in mission since their founding, the Bernardine Sisters have been central to the president’s work since the day he arrived on campus, said Sister Roberta McKelvie, who serves as Franciscan Scholar in Residence and former assistant to the president for mission integration and education.

McKelvie worked with Flynn and others to establish a Sponsorship Covenant, a formal statement defining the bond and interworkings between the congregation of sisters and the university.

“From the day he got here, he made it a point to attend to the relationship between the president, the board and the congregation,” McKelvie said. “There was never any doubt that the relationship was important to him.”

Also vitally important is Flynn’s commitment to Alvernia’s deeply Franciscan vision and mission statement, based on the ideal of “knowledge joined with love.”

“He lives it, and breathes it, and he educates toward the mission,” explained Sister Danielle Marie Kubelsky, secretary of the board of trustees. “Everything he does is rooted in the mission.”

Sister Madonna Marie Harvath, congregational councilor of the Bernardine Sisters and a member of the board of trustees, said Flynn is commited to carrying on the Franciscan values on which the university is based.

“The university was started by the Bernardine Sisters and he always mentions the fact that he’s building on the shoulders of that,” Harvath said. “He’s not only very much aware of how the university is today, but how its values will continue into the future.”

The president’s commitment to Franciscan values may have been nurtured by the sisters who taught him in grade school at Mt. Alvernia Academy in Boston and strengthened by the Franciscan pilgrimage to Assisi in which he and his wife, Helen, participated in 2007, observed Sister Shaun Kathleen Wilson, also a member of the board of trustees.

The Assisi trip was a gift to the Flynns from the congregation of sisters.

In whatever manner Flynn achieved what Wilson calls a “Franciscan heart,” he has put it to good use by implementing it into many aspects of campus life.

“Tom has ensured that this Franciscan thread is woven through campus activities, policies and orientations,” Wilson said.

While insisting that the university look outward as part of its overall mission and vision, Flynn also has been attentive to what was happening on campus, said Sister Rosemary Stets.

“He realized when he arrived here that the residential experience could be improved,” she said.

To that end, the athletic program was expanded, along with student housing and programming and the campus ministry program.

“He worked to develop a culture on campus,” Stets said.

While Flynn’s departure will reverberate campuswide, it may be most deeply felt by the Bernardine Sisters.

“I will miss his sense of humility,” Stets said. “He uses the gifts that God gave him and is highly regarded, but he wears that so well, with grace and humility.”

In addition to providing faithful leadership to Alvernia University for 14 years, Flynn has provided friendship to the Bernardine Sisters.

“He really is a friend, and we will miss that,” Harvath said. “We will miss the way he includes everyone and his personal relationship with the sisters. We will miss him just for the person that he is.”