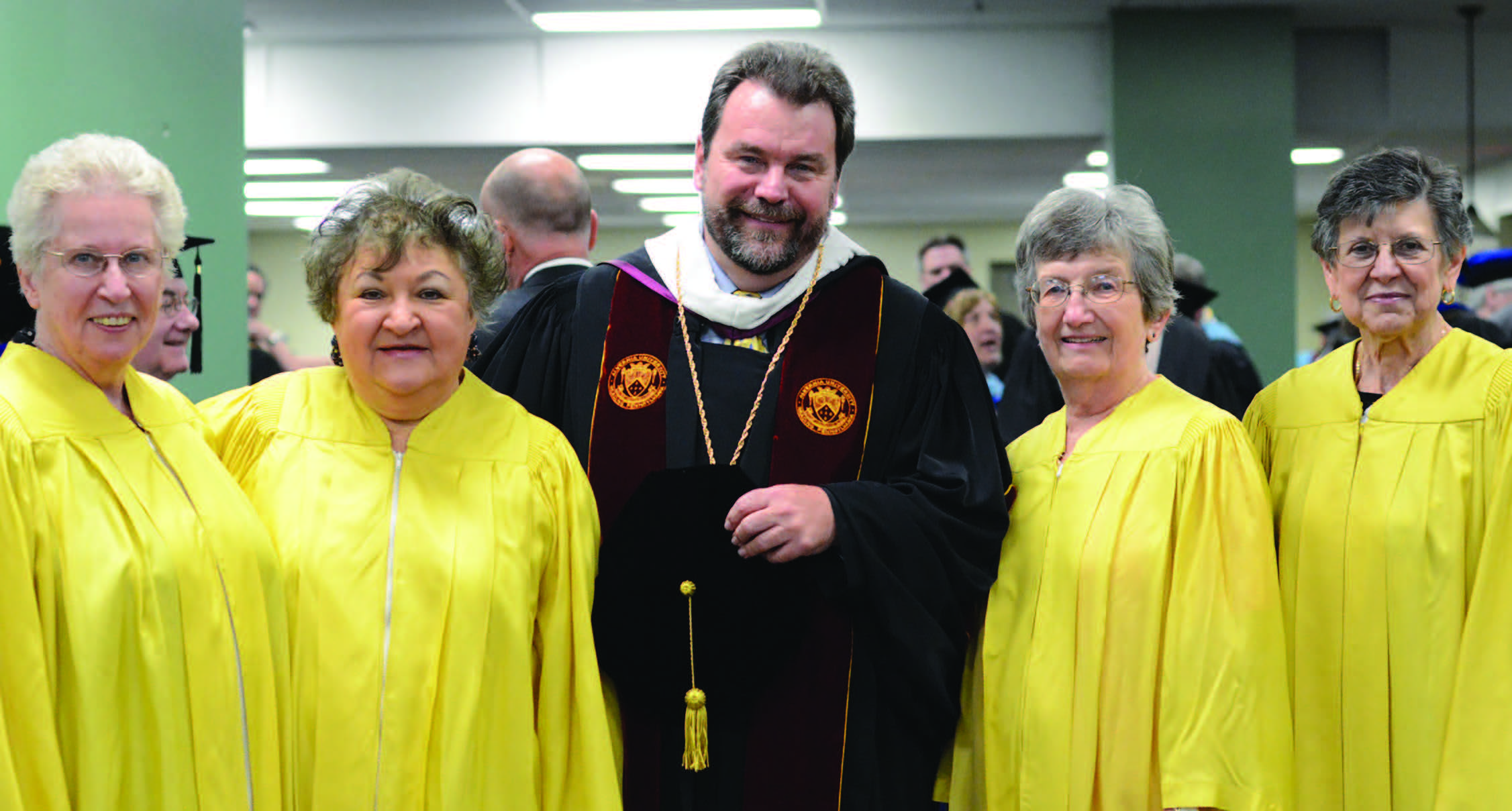 Even in a crowded room, President Tom Flynn has a way of connecting one on one, making that person feel like the center of attention.

It’s his superpower, said board of trustees member Jeannie Savage ’88, and she’s not alone in thinking that.

“He’ll turn that laser focus on you, and suddenly, you feel like the most important and interesting person in the room,” said Savage, 52, a former English schoolteacher and longtime volunteer who recently moved from Berks County to Hawaii.

As Flynn, 66, prepares to step down in June as Alvernia’s longest-serving president after an impressive 14-year run, he will be sorely missed. One of the foremost reasons, no doubt, will be his superpower—that uncanny ability to engage with alumni.

“He really makes you feel better than you are,” said Savage, who joined the board in 2015. By then a stay-at-home mom, she said she was a tad intimidated at first by her fellow trustees, men and women who were CEOs or prominent in the business community.

Flynn, however, assuaged her doubts, making clear that Savage had just as much to contribute, including the perspective of an alumna. That turned out to be especially valuable as the board in 2017 considered a significant change: adopting the Golden Wolves as the new school mascot.

“Everybody in the room looked at me,” she said. “‘You are an alum. How are you going to feel about it?’” (Turns out, Savage was a strong supporter of replacing the Crusaders, a position she had advocated for as an education and English major at Alvernia.)

“He elicits better ideas and questions from you,” she said. “There’s a real teacher in Tom Flynn.”

Steve Keiser ’80, a residential real estate investor, was already on the board of trustees when Flynn took the helm in 2005, and the 61-year-old Cumru Township resident remembers his energy.

“I thought this would wane in about a year,” said the social studies major who is a former vice president of the Alumni Association. “It never did. I don’t know how he keeps up that pace.”

“I had met him one time,” he said. “He remembered my name, my partner’s name, what we did. I’m always amazed at how much he retains.”

“He’s able to assess the person’s abilities and limitations and maximize the abilities that person has,” he said.

For Meggan Kerber ’96, ’01, executive director of the nonprofit Berks Arts Council and chair of Alvernia’s Alumni Council, one of Flynn’s real strengths is the way he has fostered closer ties between alumni and the university.

“He really has played an integral role,” said the 44-year-old Cumru Township resident who majored in psychology and later returned to Alvernia to earn an MBA. “He has made a concerted effort to go out and meet alumni, listen to alumni and learn from alumni.”

His engagement also has extended to the Reading community. By all accounts, Flynn gets credit for raising the profile of the university through the Holleran Center for Community and Global Engagement and visionary partnerships such as the one with Leadership Berks, a program housed within the O’Pake Institute for Ethics, Leadership and Public Service.

“He’s done a tremendous amount of community engagement,” Kerber said, “bringing the name of Alvernia to a much more prominent level, so when you meet someone and say Alvernia, they’re not saying ‘Who?’” They actually know who the university is. … He has taken Alvernia to new heights in his tenure through his leadership and his willingness to connect our communities internally and externally closer to the university.”

Fifty-eight-year-old John D. Wanner ’82 saw that same leadership on display while he served on the board of trustees for a decade, the last three years as vice chair.

According to the political science major, Flynn welcomed the trustees’ opinions and thoroughly studied issues before coming to a decision.

“Tom is an amazing manager and perfectly suited to be president,” said the founder and president of the lobbying firm Wanner Associates who lives in Harrisburg, Pennsylvania. “He is very charismatic, an excellent communicator. He would often say, ‘After a few years, university presidents end up with the board they deserve.’”

Flynn envisioned a master plan of growth for Alvernia from day one. “I think it really has come to pass, that and more,” Wanner said. “Tom is the perfect guy at a perfect time.”

For former longtime trustee Bob McCormick ’82, one of Flynn’s most effective ways of leading and engaging the community is his trademark mission moments—a quote or anecdote offered at the start of an event that ties into the school’s Franciscan values.

“It gives you a moment of pause as to why you are there,” said McCormick, 57, the managing partner of Murphy McCormick Capital Advisers in Lewisburg, Pennsylvania, and an accounting major.

In fact, the adjunct professor of corporate finance and economics in Alvernia’s MBA program starts his own classes with a mission moment. “Tom has really instilled that,” McCormick said.

Steven Koons ’05 got his first impression of Flynn while working as a student in the president’s office. It was a crucial year, when Alvernia was transitioning to its sixth president.

“I was able to have a very forthright and honest relationship with him,” said Koons, 36, who studied management and accounting and now is a partner at the public accounting firm Cotton & Company in Alexandria, Virginia. “He was someone willing to engage students in dialogue and include that as part of the decision.”

A few years ago, Koons, who lives in Washington, D.C., was invited by Flynn to join the first President’s Advisory Council. “He takes people’s advice seriously,” he said. “He listens to people carefully.”

Flynn also makes the small efforts to maintain personal relationships. When Koons’ grandmother died, for example, Flynn sent a Mass card. “How he knew that she passed away, I have no idea,” he said.

“For me, I’m happy for him in his decision to retire,” Koons said. “But he’ll be missed. He has been truly for me a connection to the university.”