In 1987, Alvernia’s first annual Turkey Drive fed 25 families. It was a daunting task. Fast-forward 30 years, and the drive is still going strong. So strong in fact that it has grown four thousand percent — meeting the needs of more than 1,000 families. And this year, the Alvernia Turkey Drive expects to continue the trend, feeding an astounding 1,100 families.

While that might be a lot of math to take in, one common denominator has been longtime faculty member Polly Mathys who organizes the drive every year.

If you’ve spent any time on Alvernia’s campus over the last 30 years, you’ve probably met Mathys, even if you’ve never sat in one of her Computer and Information Studies classrooms. She is involved in every stage of a typical academic student’s life, from teaching First Year Seminar freshmen classes to volunteering at graduation ceremonies — where she pushes her famous “Polly Trolly” filled with pins, pens, candy and other goodies that grads always seem to need in the hectic few minutes before ceremonies begin.

She has served in a number of committees over the years, including the Honors and Awards Committee, the Green Team and the United Way Committee. For the last 14 years, she has acted as Alvernia’s NCAA Faculty Athletics Representative.

But it’s the Turkey Drive that keeps Mathys up at night each holiday season. Some years, the need has been difficult to meet. So she spreads the “bird” word in as many ways as possible: phones, newsletters, social media, quirky videos, word-of-mouth — even walking from door to door on campus with a stuffed turkey on her head. In thin years, she has relied on news media to widen her reach.

“It's easy to forget the power of the printed word, but one year the Reading Eagle actually saved the drive,” says Mathys. “We were struggling mightily to raise our funds. After the article appeared noting the struggle, I received 96 phone calls offering donations. We made it!”

This year, Mathys expects to reach more than 1,100 local families though the Kennedy House, Bethel AME Church, Christ Church's SPARKS program, Olivet Boys and Girls Club, and the Red Cross. More will go to YMCA, Safe Berks, the USO and others. And we’re not just “talking turkey.” Hundreds of boxes will be filled with food bought with monetary donations (about $18,000 last year).

Because Alvernia is a university where community service is fully engrained, many volunteers gather to sort and pack boxes, sling frozen turkeys into trucks and deliver everything to locations around the county. And while student helpers are often new each year, others — alumni, community members, even retired faculty and staff members — return to the flock each year. “Very few non-athletic traditions in higher ed have that kind of sustaining power,” says Mathys.

Monday, Nov. 20, 2017 is the main distribution day for Turkey Drive 30. Get involved by calling or texting Polly Mathys at 484-366-3246, or emailing Polly.Mathys@alvernia.edu. Cash or check donations can be sent directly to Gwynne Kolodziejski at Alvernia University, 400 St. Bernardine Street, Reading, PA 19607. 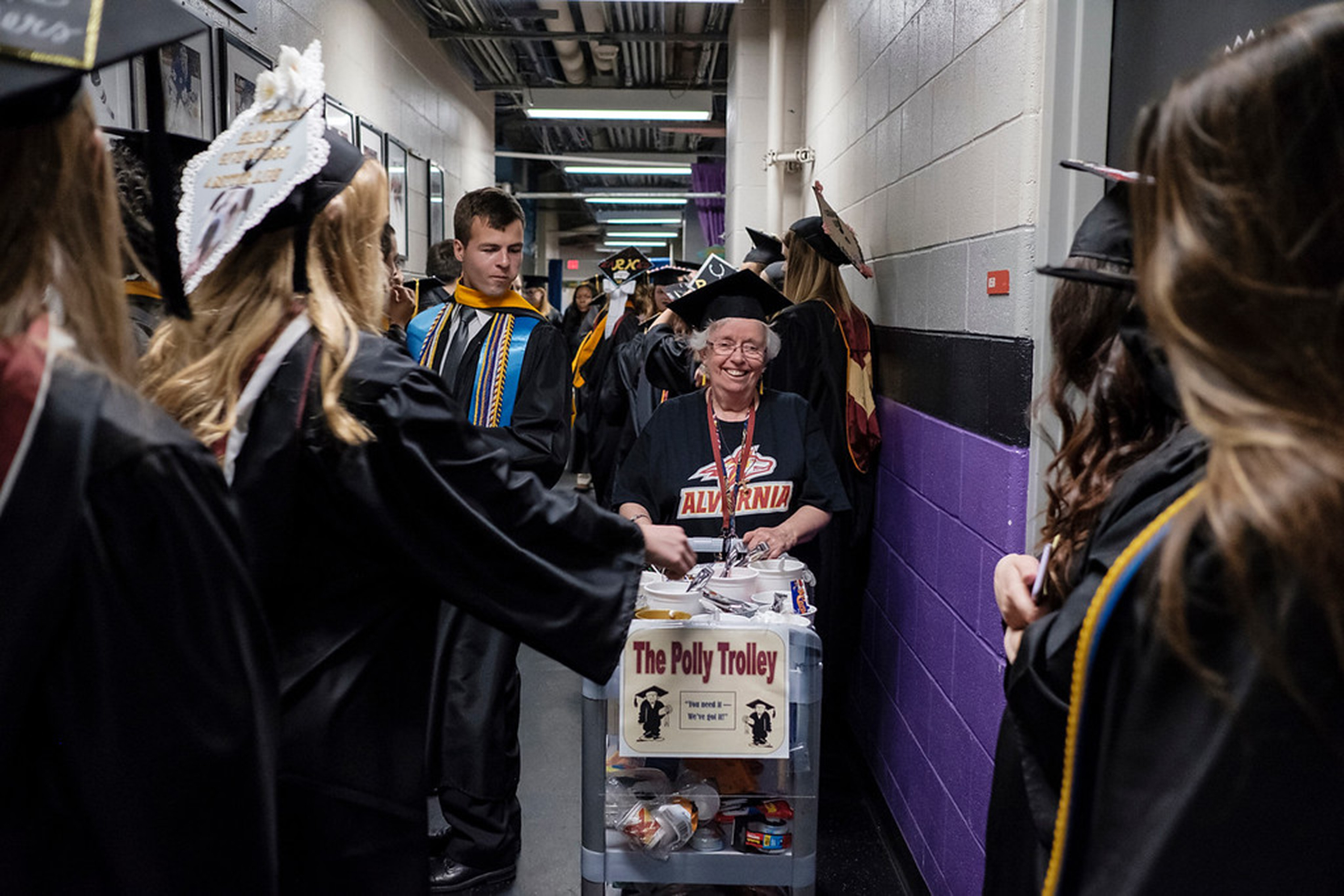