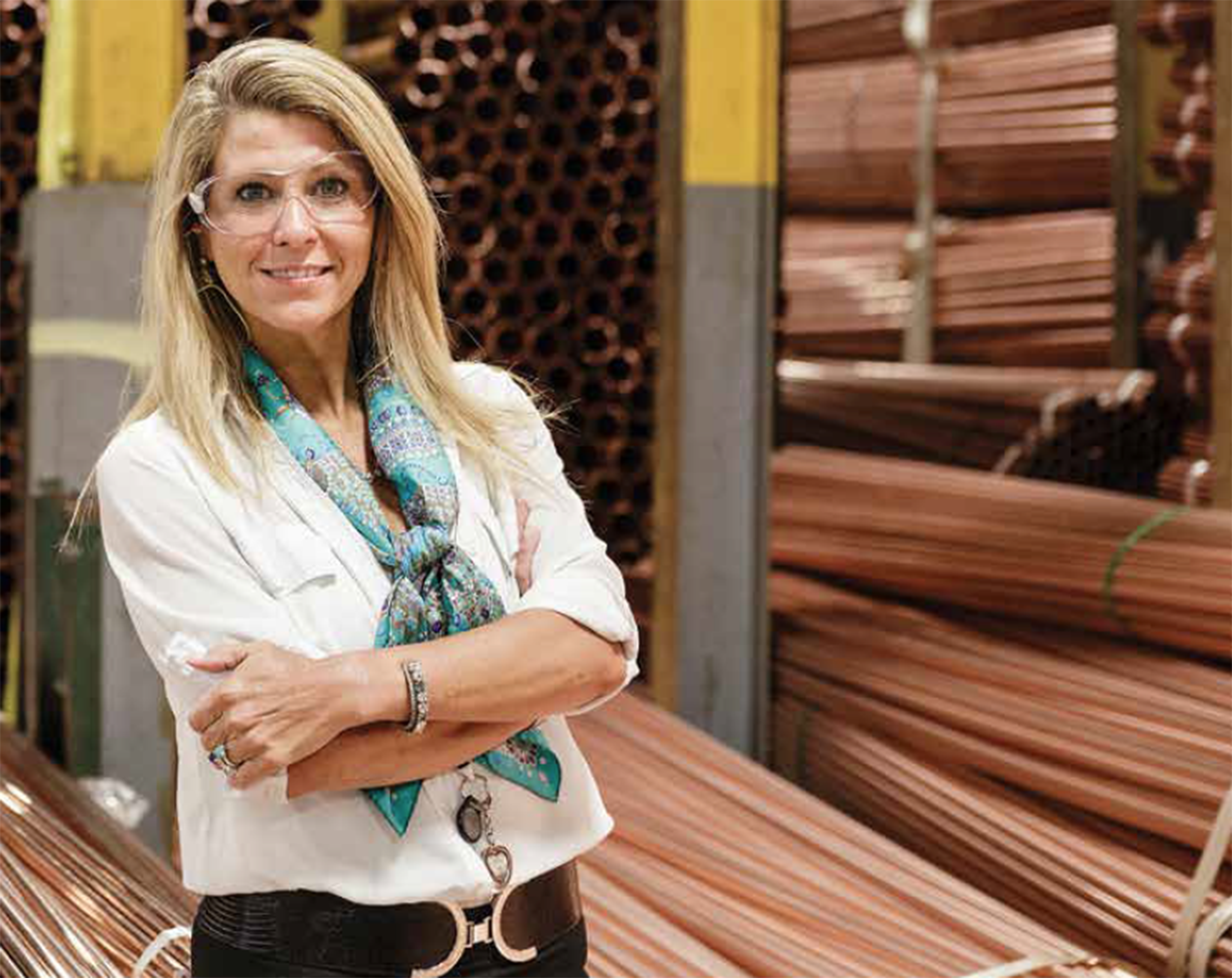 In college, Andi Funk focused on accounting before traveling the world to audit a range of interesting companies. In the process, she mastered a critical career pivot, soon turning to analyze finances at a pharmaceutical company and then on to head a finance team at a major medical device manufacturer.

It was time well spent. Today, the successful single mom sits atop the corporate ladder at Cambridge-Lee Industries, a growing copper tube manufacturer and distributor headquartered near Leesport, Pa. With $500 million in annual revenue and nearly 500 employees, Funk is thriving as one of the nation’s few female CEOs leading a major manufacturing business.

Her company is among the largest plumbing tube manufacturers in the country, large enough to supply the copper tubing for a quarter of the buildings in America.

Funk is also Alvernia’s reigning executive in residence, a role in which she spent a year working with eager business students and faculty to share her experience in the business world. It’s part of Alvernia’s strategy to give students exposure to real-world lessons and connect the campus to businesses in the region.

A member of the university’s President’s Advisory Council, Funk has seen firsthand the benefits of connecting Cambridge-Lee with experts at Alvernia to help grow their business. And so for her it made great sense to return the favor by sharing her expertise with students.

“I’m a big proponent of building bridges at all levels of education,” Funk said.

And she has a lot to share. Funk, 46, has survived several company mergers. Plus, more than half of her career changes led to new positions tailored to her skills.

Funk’s travel with Bell Atlantic was a great chance to learn about different cultures and different businesses, she said.

At a pharmaceuticals company in Collegeville, she focused on operational audits and the finance side of manufacturing. While there, she enrolled in Penn’s renowned Wharton School MBA program just after having her first child.

At Arrow International in Reading, Funk completed her MBA and continued working in finance. She grew to love using her finance skills to articulate and execute the company’s strategic plans. After the company was sold, she moved to Carpenter Technology, a Reading metals manufacturer, and then joined Cambridge-Lee in 2010, working with former CEO Edward Kerins, Jr.

“It was a great growth opportunity,” she said.

By the time Kerins retired in 2013, Funk was primed for action and had learned about the manufacturer’s back office functions.

And she’s not been slow to act. Since Funk assumed the CEO role, Cambridge-Lee relocated a plant from Mexico to Berks County. It was a complex $65 million project that has supported production growth. In 2013, the plant produced 3.5 million pounds of tubing. Last year, that increased to 15 million pounds. This year, the new facility’s making 2–3 million pounds a month.

The company has also survived the biggest copper decline in decades, relying on data-driven decision making to guide their path, Funk said.

Now Funk is happy to give students a connection to the business world.

Last November, she spent an afternoon talking to students from Alvernia’s growing business program and its respected MBA program. Students wanted to know about her background, how she hires, what a CEO actually does and how many hours she works.

“I don’t think I’m ever really away from work,” she said. Smartphones make it easier to stay connected outside of the office.

As a single mother with three children, Funk shared how she manages work-life balance by setting priorities and making sure she meets commitments.

Funk also spoke about Cambridge-Lee’s focus on culture, the importance of communicating and making sure everyone understands the motivation behind decisions.

“She was very well received,” said Donald Schalk, director of business and corporate development at Alvernia. “When she completed her presentation, 20 percent of the audience stood in line to shake her hand, ask her questions and get her contact information.”

The executive in residence program is sponsored by the O’Pake Institute for Ethics, Leadership and Public Service, which is dedicated to the late state Sen. Mike O’Pake.

“One of the goals of O’Pake Institute is leadership and civic engagement,” Schalk said. “That is not just internal, for the university. It’s for the community.”