Portrait of a Hidden Figure 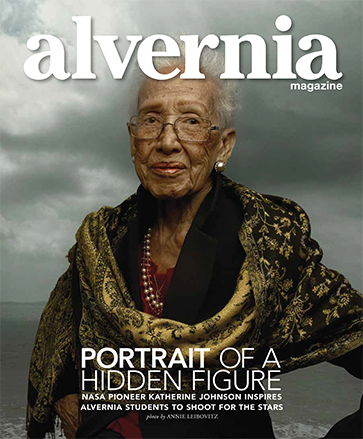 Katherine Johnson began breaking down barriers at age 10, as a brilliant student entering high school. Later, she was among the first black students to integrate West Virginia’s graduate schools. She continued her breakthroughs as a mathematician for NASA, where she crunched the numbers that launched the first Americans into space.

Pioneering work
In the 1950s and ’60s, Johnson was part of a group of black women, known as “computers,” who calculated crucial mission details such as the precise distance between the Earth and the moon. Johnson’s work was so respected that when astronaut John Glenn learned that his 1961 Earth orbit was being calculated by a new-to-NASA IBM computer, he asked for a double-check of the numbers by Johnson. “If she says they’re good, then I’m ready to go,” Glenn told Johnson’s supervisor.

Glenn returned to Earth safely, and Johnson went on to calculate crucial aspects of the first lunar landing. She later contributed to the Space Shuttle mission before retiring in 1986.

For her pioneering work, in 2015, Johnson was awarded the Presidential Medal of Freedom, the country’s highest civilian honor, by President Barack Obama. But her story was largely unknown before the publication of the 2016 book “Hidden Figures” by Margot Lee Shetterly.

The spotlight on Johnson’s accomplishments intensified when FOX released a hit movie of the same title on Christmas Day, 2016. The film captured the imagination of millions of moviegoers awed by the accomplishments of Johnson and her colleagues. The box-office blockbuster has grossed more than $200 million worldwide and was nominated for three Oscars, including Best Picture.

Opportunity of a lifetime
Fame has finally found Katherine Johnson. So have an overwhelming number of interviews, including one by Verneret and Goldsborough, both communication majors at Alvernia.

The pair shared the opportunity of a lifetime when they met Johnson and her daughter, Joylette Hylick, at Johnson’s home in Virginia this spring. Verneret asked the questions, while Goldsborough handled videography. They spent hours talking about Johnson’s hunger to learn, a passion that continues to this day. They left inspired by her humility, independence and determination.

“It opened my eyes to what I’m capable of,” said Verneret, a Reading Collegiate Scholar. “Usually when opportunities like this come up for me, I doubt myself. I think, ‘I’m not good at this.’ Being a part of this experience has taught me that I can do certain things. I should give it a shot. Everything I think I can’t do, maybe I can.”

The students weren’t the only people inspired. “It’s an unbelievable story to tell,” said Dr. Jodi Radosh, associate professor of communication. “I’m grateful that we had the opportunity to have the students be part of the experience and tell the story.”

Learning experience
Johnson’s connection to Alvernia began before her visit with Verneret and Goldsborough. Toni Eckert, director of Leadership Berks at Alvernia, suggested Johnson as the keynote speaker for the Greater Reading Chamber of Commerce and Industry’s Women2Women spring renewal expo. Working directly with Johnson’s great-niece, Robin Allen, who is head of information technology at Alvernia, and Johnson’s daughter Joylette, she secured the interview as the highlight of the expo’s keynote address. In April, Allen facilitated a Q&A session about Johnson at the Women2Women Expo.

Johnson’s age prevented her from traveling to Reading. But she was willing to participate in a video interview. “Dave Myers, Jodi and I worked together to turn the interview into a tremendous learning experience for the students,” said Eckert.

The team had just a few weeks to research and prepare. They engaged in a critical viewing of the “Hidden Figures” film. They separated fact from fiction. They read and watched interviews with Johnson to identify the interview questions and then traveled together for a visit with Johnson.

Shooting the stars
The video shoot itself presented challenges. It was the biggest project of Goldsborough’s academic career and the first time she worked solo with two cameras in an interview setting. While meeting Johnson and her daughter was thrilling, being part of the assignment was equally affirming.

“We walked into the room, and everyone stopped and looked at me for direction,” said Goldsborough. “That was a really cool moment, because it felt like I was in charge.”

Goldsborough set up the cameras and adjusted the lighting, which required some rearrangement of the room. Then, they had the chance to interview someone who had a front-row seat to history: Johnson’s daughter, Joylette Hylick.

Hylick provided a unique perspective of her mother’s work. She said she didn’t appreciate the significance of her mother’s contributions until later in life. “Mom is very humble,” Hylick explained. “She says, ‘I don’t know what all the fuss is about. I was just doing my job.’”

Hylick, a retired computer programmer now in her 70s, shared her own advice for rising above challenges. “You have to be true to yourself,” she said. “You learn as much as you can, and if the people around you don’t appreciate it, then it’s time to look for another situation.”

Sharing the story
When she returned to Reading, it was Goldsborough’s task to edit the two-hour conversation into a compelling 30-minute video.

“It has been the best real-world, hands-on experience I think the students can get,” Radosh noted. “I got to mentor them and show them what it’s like to be a journalist and a videographer on a real shoot. There’s no other way to get this experience than by doing it, especially with such an interesting topic.”

But the video isn’t the only treasure Verneret and Goldsborough brought back from Virginia. Before the students left Johnson’s home, she and her husband agreed to briefly speak with them off-camera. They leapt at the opportunity.

“She loves students,” Goldsborough said, describing the conversation. “People sometimes discount you because you’re a student or because you’re young. From her family, I didn’t get that vibe at all. She really admires learning and encourages it.”

When asked what her mother hopes her legacy will become, Hylick responded: “She wants to be remembered as someone who wants to learn [and] is always prepared to take advantage of an opportunity when it presents itself.”

Based on the reporting of Verneret and Goldsborough, it sounds like Johnson is still calculating the trajectory to the bright side of the moon.