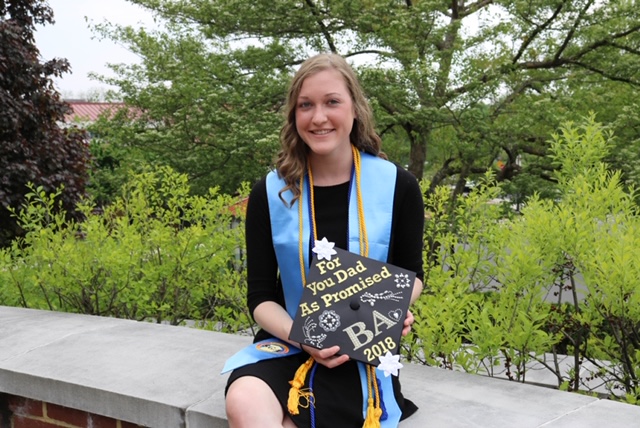 Stephanie Berlin ’18 grew up in Fleetwood, Pennsylvania, raised by a tight-knit family who always made an effort to spend time with each other. They attend concerts and sporting events, as well as embarking on an annual family vacation.

It comes as no surprise that when her parents divorced, it shook her world. Her father suffered from alcoholism, and through seeing the effects of his illness firsthand, it became clear that counseling was her passion. “My father never sought help for his alcoholism,” she said, “so my goal in the field has always been to provide the help and hope to others who are struggling with addiction or mental illness that my father was not fortunate enough to receive.”

The desire to help those in need pushed Berlin to pursue her dream. She enrolled at Alvernia as a Behavioral Health major and began her undergraduate internship at Caron Treatment Centers in 2016. In August 2017, the company hired her as a counselor assistant.

Before he could see her graduate, Berlin’s father died from cancer. “One thing my father said before he died was that he wished he could stay alive longer to see me graduate,” she said. “I am the first person in my family to go to college, and there was always a sense of pride I experienced from my father for my accomplishments.”

Her father’s pride encouraged her to strive for more, so Berlin returned to Alvernia to pursue a master’s degree and become a full counselor. She has future aspirations to pursue her doctorate and become a professor for the field, like the instructors that had encouraged her. “There are not many things that I am always sure about in my life,” she said, “but I have never been surer that coming to Alvernia and becoming a counselor was what I was meant to do.”